ALL AT SEAThe Caribbean\'s Waterfront Community
HomeBahamasEarl and Michelle Weber: Having the Time of Their Lives
BahamasGuana Cay BahamasSoutheast USNew Orleans LA

Earl and Michelle Weber: Having the Time of Their Lives 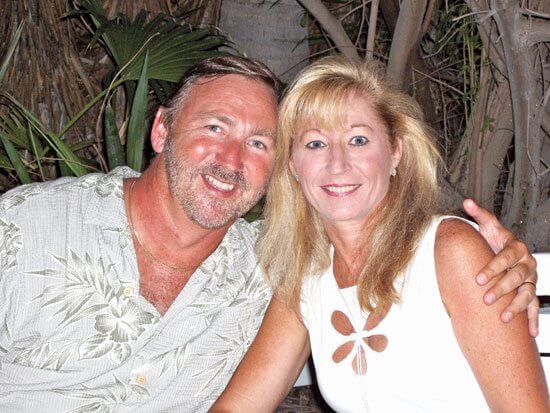 “I wanna party wit you!” Earl Weber’s bubbly voice enunciates the slogan on the carefully pressed t-shirt his wife, Michelle, is holding on a hangar.

It’s the rallying call for the Krewe of Conch, and Earl Weber is the king. Mardi Gras isn’t enough. Earl and Michelle launched their own parade: Krewe of Conch, a band of merry mariners who cruise to Guana Cay in the Bahamas each May.

Rendezvous point: The iconic bar’s palm tree – that pole everyone dances around. It’s the palm that shimmied so much it lost its fronds on top.

“The population of Guana is like 96 permanent people,” says Michelle. “When we go down with 47, Guana’s population increases 50 percent. We have kids in sleeping bags all over the salon, adults in the four staterooms.”

“Her nickname is Sparkle,” Earl says with a smile.

The Webers’ natural charm – a combination of good humor, good looks and southern hospitality – is magnetic.

“We don’t have the biggest boat or the best boat,” Earl says. “But we have more fun on our boat than anybody. Period. We’re from New Orleans and we’re New Orleans people. That means we party. If we’re not having fun, let’s not do it.”

Earl displays his photo album in his penthouse in the heart of the French Quarter. The album has about 400 photos and every single person in every picture is smiling. One shot seems out of place, with a woman who looks sad and wet, like someone rained on her parade.

“That was hysterical,” Earl explains. “This lady was seasick and on Dramamine. She never had one drink of alcohol that day. But she did fall off the boat, into the water, upon disembarking. She wasn’t hurt, but she got soaked,” he hoots. “Here she is again, a little drier, a few hours later.”

The Abacos – A Calm and Shallow Sea

While the Webers have the money to live anywhere, they choose to live in New Orleans. After Hurricane Katrina, Earl and Michelle moved with their sons, Jonathan and Michael, into the signature Jax Brewery building, which Earl bought in 1999 to develop into residential condos.

“You couldn’t get us outta here with dynamite,” Weber says.

Television networks stake out the Webers’ rooftop to film the New Year’s ball drop and to get the best shots of St. Louis Cathedral, Jackson Square, and the mighty Mississippi in the heartbeat of New Orleans. The view is tremendous. The Webers are the literal epicenter of party central USA.

Earl and Michelle stroll to their favorite restaurants, like Port of Call, Galatoire’s, and the world’s best cuisine just steps away from Jax.

“One day, you end up in a pine box. The guy who has the most fun wins. That’s how we live,” Earl says.

Earl Weber walks his talk. His parents died in their early 50s, about the age he and his “Sparkle” are now. His father passed when Earl was just 17 and his mother three years later, but many good times shaped the backbone of his personality. Instead of having a chip on his shoulder, Earl embraces life with both hands and both feet. He’s a self-made man who’s not selfish.

He put his photos from the Krewe’s last rendezvous aside to discuss his love for boating, which started as a child on Bayou Bievenue. Earl water skied daily and built his first boat at age 12.

“It was just a little wooden flatboat with a four horsepower Mercury motor,” Earl says. “It was eight feet, the biggest sheet of plywood we had at the time, and I made it with my own hands. We had a great time and started from there, skiing, fishing, and hunting every day until I moved from St. Bernard. I’ve had in the neighborhood of 40 boats, including that first wooden one.”

Today Earl Weber stands his ground as a local New Orleanian determined to keep his city alive during Katrina’s seventh anniversary. His sons attended local schools during the city’s metamorphosis in a post-Katrina world. Earl and Michelle Weber are part of the city’s backbone, helping other survivors put their lives, businesses and community back together, one day at a time.

While they pack 20-plus people on Caribbean Sparkle with plastic go-cups to transport drinks, it’s evident that the Webers’ secret to happiness after 30 years of marriage is “playing together.”

The Webers are now planning for Caribbean Sparkle II, having recently closed a deal to sell the yacht that provided so much merriment to so many guests. They’ll continue to keep most of their cruises to 10-14 days.

“If we leave for longer on the boat, we’d miss too much here,” Michelle says. “It would be living away from New Orleans, and there’s still so much fun here. The French Quarter is better than ever and our city is back!”