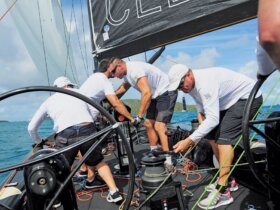 Hitching a Ride on a RC44

Would you have liked to watch the Americas Cup? Americas Cup is the most famous match racing event in the world. Match racing is the only spectator friendly form of the sport of sailing and for the first time a professional level match racing event will take place on St. Maarten next Tuesday, when the Budget Marine Match Racing Cup takes place in the Simpson Bay Lagoon. The favorite is Peter Holmberg, the St Thomas native who is the most famous Caribbean sailor who spent the last few years being the relief skipper on the eventual winner of the Americas Cup, the Allinghi team. He is one of the small group of professional sailors whose high level sailing skills (he won a silver medal in the Korea Olympics) have been further honed by years of professional training to win sailings most prestigious trophy.  He will be up against teams from the US , Brazil and Russia.

On Tuesday the match racing can be seen in the lagoon off the airport runway. This spectator friendly event can best be seen by coming by boat or dinghy. There will be a marked off area where spectator boats can anchor or with smaller boats it will be possible to follow the boats as long as the boat is kept out of the direct way of the competitors.  If competitors do come towards the spectator boats, the skipper is asked to simply stop the boat as he has become an “obstruction “ in the racing rules.

Spectators will be treated to high level boat handling and aggressive maneuvers that will be adjudicated by a team of international umpires who will be following every pair of competitors and will occasion wave flags that will indicate penalties to be taken or not. Amongst the umpires will be St. Maarten’s David de Vries and regular snowbird Paul Miller. The prize giving for the match racing will take place at the St. Maarten Yacht Club right after the event, where the first prize cheque of $ 5,000 will be handed over to the winning team.