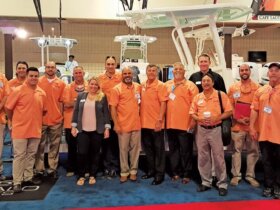 If You Go
Bring plenty of sunscreen and mosquito repellent, or even better, long sleeves and/or other clothing items for protection from the sun and biting insects. If you take the tour in the summer months, no-see-’ems and mosquitoes can get pretty bad in the parking lot and surrounding picnic areas. The briefings about the park given by the rangers are excellent – full of interesting facts about the bio-diversity. Kids are welcome and the snorkeling is well supervised.

Wrecks on the trail include:

Arratoon Apcar – Sank 1878
In the 1870s, Cape Florida Lighthouse was considered inadequate because of its distance from the reef line. When Arratoon Apcar ran aground, it did so just a few hundred yards from where workers were busy building the Fowey Rocks Lighthouse.

Alicia – Sank 1905
Alicia was laden with silks and silverware when it ran aground on Long Reef. The ensuing, often violent battles among the 70 different groups of wreckers led to a permanent rewriting of U.S. salvage laws.

Lugano – Sank 1913
At the time of its grounding, Lugano had been the largest vessel ever to wreck in the Florida Keys.

Mandalay – Sank 1966
The steel-hulled schooner Mandalay was known as the “Red Carpet Ship of the Windjammer Fleet” and was outfitted with a teak and mahogany deck.

Kids & SCUBA Diving – What to Know Before You Go

The key to success is knowing when your child is ready and choosing the type of instruction. A lifetime of exploring awaits