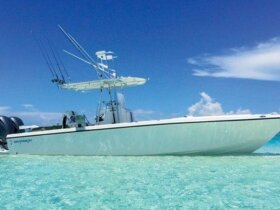 New Year’s Eve, 1965, a gleaming Brigantine schooner sailed on a brisk north wind toward the lights of Miami.

Mandalay, elegant in her mahogany, brass and ivory trim, rose and fell above the waves while 23 well-heeled vacationers strolled her teak decks the last night of a 10-day Bahamas cruise. After the partying, her passengers retired to their staterooms. So did the skipper, Capt. Asmund Gjevick, leaving a novice seaman at the helm.

In the pre-dawn hours of the next day, the guests and crew of the Mandalay were startled awake by the sound of grating metal. The schooner’s steel hull was driven onto the razor coral of Long Reef, several miles east of Elliott Key.

Rushing on deck, Gjevick realized he had miscalculated the distance from Fowey Rocks Lighthouse. The novice helmsman had no idea the schooner was 20 miles off course. The gleaming luxury vessel’s steel hull was torn open; she was sinking.