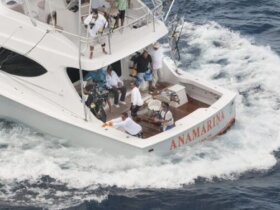 It was that time of the year again when sailors from all over Puerto Rico trailer or sail their boats from San Juan, Parguera, Boquerón, Fajardo, and other towns to Ponce to take place in the Discover the Caribbean Series (DTCS).

This event started in 1989 after Hurricane Hugo did some major damage to the Fajardo area. It is composed of three sailing events, the “Feeder Race” from Fajardo to Salinas, then to Ponce, followed by “The Series” – two weekends of around the buoys racing outside of Ponce. Along with the racing, there are always countless onshore activities for sailors of all ages.

This year’s event started with an early registration and press conference at Club Nautico de San Juan where the event was dedicated to Mr. Bob Fisher for his lifetime commitment to sailboat racing in Puerto Rico, and to the young Optimist sailors from Puerto Rico who dominated many international events this year.

“Feeder Race”
The Feeder Race from Fajardo to Salinas was held on October 13. The fleet enjoyed 2 epic days of fast sailing, with very favorable Southeasterly winds, which allowed them to surf the swells using their spinnakers most of the way to Salinas. On Salinas we were greeted by very friendly members from the Ponce yacht & Fishing Club (PYFC), at the Ramos family residence, who welcomed us with a tasty Puerto Rican meal and lots of Don Q rum.

The next morning we sailed to Caja de Muertos island where we were given lunch and drinks aboard Dr. “Guangui” Davila’s motor yacht, the Laura Mar, before continuing on to Ponce’s Club Nautico.

There were over 40 sailboats that raced on the following classes: Racing, IC 24, J/24, Jib & Main, Cruising, Snipe, and Chalanas. Congratulations to all of this year’s winners!

The DTCS  was a great overall experience for my family for various reasons, the great people we met, the great sailboat racing we had, and most of all because it was the first regatta ever for my dad, my wife, and our two children and also our first family regatta aboard ¡Nada Mas!

We recommend the DTCS to anyone who loves well organized/fair sailboat racing in a variety of wind & water conditions. We would llike to thank the wonderful people at the Ponce Yacht & Fishing Club (Quino, Lourdes, Guangui, Puchy, Candido, Carlos, Chin, Ronnie, Robbie, Alicia, etc), for a well organized event, and also for their unbelievable hospitality.

We will definitely be back next year!

Capt. Tony Miró is a life-long sailor, photographer and web developer who currently lives in Puerto Rico with his family. He enjoys sailing aboard his Hunter 376 ¡Nada Mas! www.sailboatspecs.com