When Snipe sailors Jimmie Lowe and Peter Bruce Wassitch went to the Pan Am Games to represent the Bahamas a few years ago, they looked around and realized that they were among the oldest sailors at the Games.  While they were elated to be representing their country, they were disillusioned.  The source of their disappointment was the realization that an entire generation of Bahamian youth were not sailing at home or at international competitions.  Lowe, who is retired and Wassitsch, in the prime of his life, returned to Nassau with the goal of rectifying the situation.  They wanted to introduce sailing to the public school curriculum throughout the Bahamas and launch a national sailing school.

Lowe and Wassitsch approached the Bahamas Sailing Association (BSA), the nation’s national governing body for the sport of sailing.  One of BSA’s primary missions is to promote sailing to all Bahamians regardless of race, religion, gender or political affiliation.  With the endorsement of the BSA, Lowe and others approached the Ministry of Education.  What they lacked in financial support and equipment, they more than compensated for in enthusiasm and commitment.

Lowe went into the public schools in Nassau to recruit candidates for the first summer camp.  One of the only pre-requisites to participating in the four-week learn to sail session was passing a swim test.  While many of the eager youth did just fine, a couple sunk right to the bottom of the pool and had to be resuscitated.  The swim test didn’t sink the program, instead it was the genesis for yet another program introduced to the public schools and those interested in sailing – swimming lessons.  Lowe recruited some of the top Bahamian swimmers to teach aspiring sailing students how to swim.

When the first of the two four-week summer sailing sessions took place three years ago, the Bahamas National Sailing School was operating with six Optimist prams and a lot of hope.  The Nassau Yacht Club graciously offered up the use of its facilities to help launch the school.  While some of the students were learning how to sail, those who needed a little help learning how to stay afloat and swim, took swimming lessons so that they could jump into the Optimists during the second summer session.

As the Bahamas National Sailing School goes into its third year of operations, patrons have generously donated 103 Optimists and Lowe, his full-time staff of two and volunteers have introduced the program to public school students on Long Island, Eleuthera, Abaco and Grand Bahamas.  Children who couldn’t swim or sail at the program’s inception have been exposed to a pastime that they can enjoy for the rest of their lives.  They’ve learned about team work.  They have additional extracurricular activities, including weekend sailing throughout the year, especially during the summer, and the Bahamas was able to hold an Optimist National Championship with 56 competitors last year.  Lowe, who is the Director of Sailing Operations of the Bahamas National Sailing Association, continues to champion the program.  There are two full-time employees and lots of volunteers helping him to grow the program.  Lowe is looking forward to coaching Bahamian junior sailors and a new crop of sailing coaches in their preparations for the 2011 Pan Am Games in Guadalajara, Mexico. 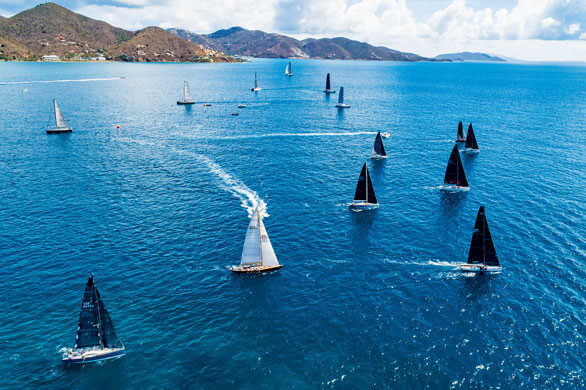