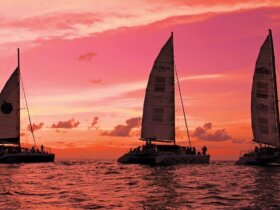 A first charter is similar to first sex. There is a lot of anticipation and nervousness but with no experience, it doesn’t always come out as you would like!  Our first charter in the Virgin Islands was unique. It began two weeks after we arrived from Newport, R.I. in December 1967.   We only had enough time to motor over to St. John for several days to explore before the charter guest arrived.  That’s right – one person, with whom we were barely acquainted, from Fort Worth.

“John” was a nice-looking, slim, man in his early fifties with tinted blond hair. Bright blue eyes, a somewhat knurled face, flat belly. He was looking for an adventure but he wasn’t adventurous. Not sure that he would like the accommodations on the boat, he booked a room at the hotel on Water Island and probably won the record for bringing more luggage than any other single person visiting the islands – 125 pounds to be exact.

It was a good thing that he got a room because John was a prima donna. His wardrobe was extensive. He had enough itsy bitsy bikinis to change them three times a day, plunging sexy shirts and more formal nautical clothes complete with captain’s hat – oh yes! – for the five evenings aboard. Besides the clothes, he had the accessories to go with them – dive gear,  golf clubs, tennis rackets, outfits for croquet, horse shoes, bowling, dancing and probably some sexy things to lure the young ladies. It was a good thing there weren’t any casinos or he would have had tuxedos, too.

Fortunately, we convinced John to leave most of his fancier clothes, golf clubs and tennis rackets in his hotel room. That made for a late start but we arrived at Christmas Cove at Great St. James at cocktail time. The first evening went fine, dinner wasn’t burned, John was appreciative and even went to bed before midnight.

The week before John arrived, Mike had gotten his fingers caught in the anchor chain while letting it out from the windlass. They were chewed up and very sore. We hired a young Canadian lad named Larry to help with the anchoring, sailing and various chores. The arrangement helped us relax a little. But the next morning my nervous tummy acted up and Mike had to cook breakfast which he did well. When it was time to get underway, Larry stood by the anchor while Mike went up to the outside steering station which overlooked the pilot house roof.

There on the roof in the center of the orange, oval life ring was a neat little pile, a present from the cat. When Mike saw it, he grimaced and in a loud, angry voice announced, “Cat! This is total war!” Cat, an ornery, calico feline was in one of her hiding places under the companionway. She was feisty, anti-social and, well, a cat. Mike grabbed her by the scruff of the neck, took her on deck, rubbed her face in her little deposit, yelled “NO!” loudly a few times and heaved her over the side. He made at least fifty yards on that toss.

When Cat landed in the water, she tried to walk on it first. That didn’t work, so she made a fast beeline for the boat. We had the fishing net ready to catch her as she swam alongside, but she was so quick that we couldn’t get her. Mike ran across to the other side and managed to scoop her up as she streaked past. Aboard, her dignity severely damaged, she hissed in her most spiteful manner and disappeared below where she licked the salt off and threw up.

All this time, John was watching this performance with a bemused expression on his face. As we got underway, he shook his head slowly, grinned widely and said quietly, “Mike, I’m never ever going to engage in total war with you!”