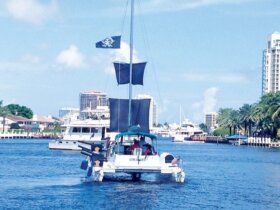 When you fall in love with a pretty woman, you appreciate the cut of her jib, the flare of her beam and her pleasing transom. So it is with your boat.  You want her sleek with a tall rig, slender bow and perhaps a graceful wine-glass stern. No wonder we think boats are feminine!

In 1968 Mike and I had our eye on a 49-foot fiberglass sloop named Sheba built by Bill Rudolph. Sheba had a big gun-tub of a cockpit, plenty of lounging space and two private cabins.  Our first year we had only seven charters on Avenir, a 62-foot  motorsailer, a fine vessel in her time, but to us, stodgy and slow. We wanted a smaller, more modern boat that would sail well and have suitable accommodations for charterers—you know, a bunk or two with one drawer and a hook for their clothes! We sold Avenir, bought Sheba and changed her name to Avenir II.

By 1970 the charter fleet had grown but it was still a hodge-podge of boats, from 40-foot narrow, classic yachts to 80-foot old schooners. The majority of those had typical interiors of their era—cockpit aft, galley (such as it was) forward, a pilot berth beside the companionway on one side with chart table on the other. The main salon was next with folding table and four single berths, a head and hanging locker forward and a forepeak where the crew slept.

A few of the yachts had been built for the wealthy owner who traditionally had his own spacious “great cabin” aft. The great cabin design wasn’t the best layout for chartering if there were two couples aboard because of the large discrepancy between it and the other barely-private, cramped cabin forward. Each couple wanted the great cabin, of course, so mid-week they changed places which meant moving luggage and all their belongings and—gasp!—giving each couple another set of clean sheets. Whoever heard of that!

The owner/crews were quite a mixture themselves, but they all  wanted the same thing: to live on their boats and sail. It was tough having to share your fiercely-loved boat with people who didn’t know the pointy end from the square end. And you had to feed them and entertain them, too? Well, OK, but only if they didn’t seriously interfere with limin’ on the beach, picking up cuties, and, er…sailing them around the mooring.

Chartering really wasn’t too bad, though. Guests were only aboard a week or less. And if they gave you some lip, you’d just leave ‘em on a beach in the hot Sun until they came around to your way of thinking. Huh!

Chartering was becoming more serious by the end of the sixties.   Ocean Enterprises, the Smiths’ central booking house, and early brokers like Evelyn Whitney who was booking CSY’s bareboats at the time, were helping to change the haphazard chartering into a business which could provide a decent living. But it meant getting organized!  Oh! Oh! Organization was a bad word. It would spoil everything! That’s why we all left the states and were in St. Thomas, dab gum it!

In 1969 Bob Smith announced that he was starting a charter boat league and if anyone wanted to join, to come to the snack bar in the Yacht Haven Marina building on a certain evening. Surprisingly, about forty people did. But the rest expressed their disgust and opposition by setting off cherry bombs on the dock during the entire meeting! It was a stormy beginning, and although the V. I. Charter Yacht League today is sophisticated and essential to the industry, the meetings are still sometimes stressful.

An example:  In the early seventies a boater was mugged on the beach next to Yacht Haven. A meeting was called. Someone suggested that we all wear a whistle around our necks and if attacked, to tweet five toots, the international distress signal for help. Immediately there were fierce objections:  The whistle would get in the way…would interfere with necklaces…would corrode…couldn’t be heard very far away, etc. Finally, in exasperation, Peter Munch who then owned Athena, s tomped up to the front of the room and yelled, “Then give five loud farts!”