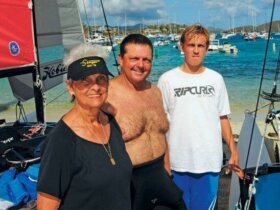 Sailing and The Famous Holmberg Family

Purchasing the right chartplotter for your vessel is an important investment in your enjoyment aboard.

Do you  need a Touchscreen Chartplotter?

In the previous article we discussed the importance of going with the largest screen chartplotter possible.

Just imagine trying to navigate with a paper chart cut into very small rectangles and having to switch between the pieces to get a feel for where you are and where you’re going. It’s the same thing with a chartplotter display. You are cramming a lot of detail into a small area and will need to be able to decipher it clearly. Add to the chart data boxes displaying vital information and things start to get cramped pretty quickly. Now add to the display a split screen with other information such as a bottom structure display or a radar display and you really have a lot of information in just a small area. With smaller chartplotters you will find yourself zooming in and out constantly to get a feel for the chart and what is around your current position on the screen.

Of course as with everything boating there has to be a compromise. Not all of us have the luxury or dash real estate (or wallet for that matter) to have multiple large displays clearly showing all our information. There are some very suitable compromises to be had, however.

Most of today’s manufacturers offer touch screen models that can allow for a larger screen size in a smaller comparable area.

Garmin was one of the first to offer touch screens in smaller displays, such as the 740 series (Garmin Gpsmap 740 Touchscreen Chartplotter Preloaded With U.s. Coastal Maps)

Because they eliminate all or most of the buttons found on conventional chartplotters, the bezel and faceplate of the machine can be reduced and the screen size can be enlarged.

A good example of this would be Lowrance’s new HDS touch chartplotters that can allow for the next size screen in about the same space as their smaller-screened conventional non-touch chartplotter. Lowrance is not alone in this capability as most other major manufacturers of quality chartplotters are also moving in this direction.

The touch screen chartplotter are not only gaining popularity because of their screen size advantage. As consumers become more used to operating their smart-phones and tablets via touch screens the menus and operating logic of touch screen chartplotters make them easier and more intuitive to use. Rather than having to press combinations of buttons to access menus and sub-menus, one can just follow along with the on-screen directions. Touch motions that you are familiar with in using your phone or tablet make operations like zooming and panning quick and simple.

“You can actually control the display with the remote touch device.”

A touch screen chartplotter can improve your experience, but to truly appreciate what they are capable of, you have to reach out and touch one for yourself.