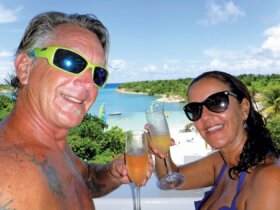 Some balls are distinctive, others are not. It doesn’t really matter how large they are. What counts is what kind of package they come in.

Some of our most delightful charter guests were Dan and Joellen Hagge who started chartering with us in 1968 on Avenir, our first boat. We hit it off right from the start and have been close friends ever since.

Dan was a punster and sipped from a coke can laced with Mount Gay all day long. The later the day, the funnier he got, although there were a lot of groans as his puns became more outrageous.  Joellen, an energetic go-getter with a passion for adventure, went to great lengths to snorkel in new places and to collect shells.  Being related to a famous conchologist, she was astute and knowledgeable. It was up and at ‘em from the first day and we were eager to learn from both of them.

We first met Dan and Joellen who were staying then at Drake’s Anchorage on Mosquito Island in Gorda Sound. On one of their charters they took us to the Guana Island Club where they were members. Very exclusive even today—you are politely escorted back to the beach if you should wander above the high water mark. There we enjoyed the facilities including their one-of-a-kind outhouse where you could ensconce yourself and see both the Atlantic Ocean to the north and White Bay to the south.

Anegada was their principal target on our Virgin Islands charters. In 1968 Anegada was still asleep and the Soares family were just starting what would become Neptune’s Treasure, the only bar and restaurant. There was a small pier at the Settlement which was just a collection of houses that could hardly qualify as a “town.” The airport was simply a field with a wind sock and a sign.

Interesting shells were sometimes found on the beach as were the best balls. On one of their previous trips, Joellen unintentionally spent a whole night huddled above the beach on the north side because she had walked too far looking for shells and no one could find her.  We were not very familiar with Anegada yet, but we learned from Dan and Joellen that Loblolly Bay had some of the best snorkeling, and where one might find the biggest balls.

The technique was to look under every bush and into every hollow at the highest tidal range above the beach.  Dan, Joellen, and I searched among the bushes well ahead of Mike who grumbled loudly that it was silly stumbling around and getting scratched by the thorns. But he came along behind us and checked every bush that we had previously examined.  All at once, he let out a loud whoop, stooped down under a bush we had all passed, and lifted up a huge green glass ball encased in beautiful rope work. He had found the grand prize!

Back on the boat having cocktails on deck, Dan looked around the boat and asked Mike where he was going to hang the ball.  Mike roared with his great laugh and said, “I’m going to hang it above your bunk so that every time you sit up, you’ll bang your head on it!”