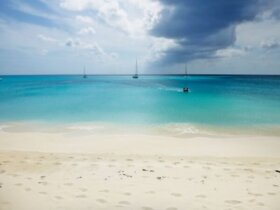 There’s something special about celebrating Christmas with your guests even though Santa Claus wouldn’t come aboard, right?

Oh, yeah, he would! He’d slide down the chim – um, mast. Or perhaps come by dinghy. One Christmas night on Avenir II, Santa Claus, complete with beard, hat, britches and boots, rowed up in his dinghy and tossed presents and candy aboard. (The reindeer were parked somewhere on shore.)

Many charter boats went all out for Christmas. The Christmas tree was important. The traditional island Christmas tree was a dried up Century Plant left natural and decorated with pretty shells and driftwood. Few if any live trees were brought down to the islands but plastic ones could be found. The trouble was, plastic or otherwise, it was hard to fit a Christmas tree anywhere inside a boat.  Hang it over the bed in the guests’ aft cabin? Or stuff it in the head? No room in the galley either, so maybe somewhere on the chart table?

Some sailors solved the problem by putting their little tree at the top of the mast.

An easier way was to make a small tree with dowels covered with colorful ribbon and ornaments tied into a corner.  The most unique Christmas tree we ever saw walked and talked.  Bud Beaulieu, a popular mechanic/electrician, dressed himself as a tree complete with decorations.

What about hanging stockings? Maybe something nautical that could be stuffed easily with goodies? (Forget the head or the bilge.) Large swim fins worked perfectly. We’d lay large fins on the main salon table with Christmas paper, ribbons and doodads for everyone to decorate.  Always they were stuffed to the gills, no, I mean, fins!

Popular presents from the crew to the guests were tiny bottles of rum labeled “Shark Repellent”, as were water pistols for repelling pirates.  Beautiful, unusual shells were prized, although their hermit crab occupants weren’t! Eye patches, pirate head scarves and plastic swords were a hit with the kids.

After dinner we’d pile into the dinghy with citronella candles and putter over to the nearest boat to sing Christmas carols accompanied by my harmonica.  They’d join us in their dinghy tied astern to ours and sing along with us. Soon there’d be a string of dinghies filled with people, all lit up (with candles), winding through the anchorage and singing carols at the top of their lungs. Although those in the rear couldn’t hear what the others ahead were singing, it didn’t matter. They just sang along, about a verse later.

Christmas Eve parties on board were especially fun. Three or four charter boats on the same schedule would agree to meet at The Bight at Norman Island. The two biggest boats each put down an anchor and tied together while the others tied on either side. Everyone contributed ice, drinks and Christmas goodies to the two mother vessels where the party would concentrate. Once, seven boats were rafted together. During the night the wind piped up and the two boats tied to the mother boats put out anchors. The entire raft went around in circles before morning. Imagine the unbelievably twisted mess of the four anchor rodes. It took dive tanks and many relays to the helmsmen to turn the raft the right way.  By noon we were finally extracted from each other.

By the mid-seventies the charter boats were bigger, more luxurious and had large generators. It was a contest at Christmastime to see who could put up the most lights. But it wasn’t a charter boat that easily outdid the others. It was a 28-foot sloop. Its skipper was Glen who seemed to work only when necessary. A nice chap, he could carouse but more often lived alone in his own quiet way. But when it came time for Christmas, Glen outshone us all.  From mast tip to pulpits he strung lights. The lifelines, toe rails, boom and cockpit were festooned. A small Honda generator powered them and a stereo booming wonderful Christmas carols. During Christmas week Glen’s boat was a brilliant juke box that powered slowly past each boat in Long Bay for several hours each evening.  That was Christmas spirit at its best!