Cruisers Ashore: The Good, The Bad, and The Ugly 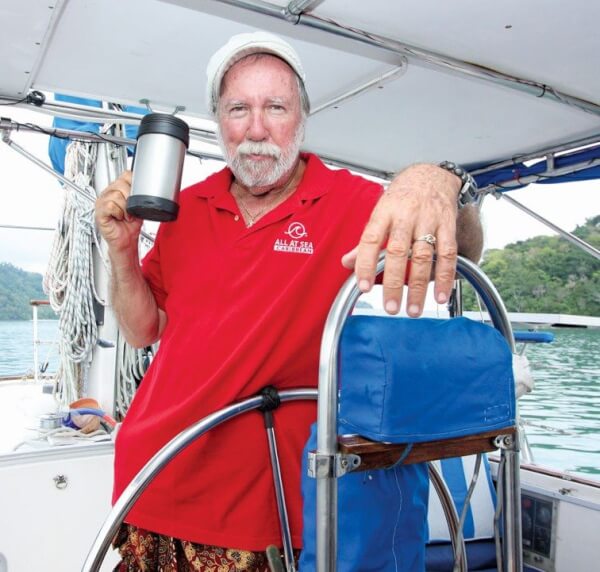 It’s true. Otherwise sane, well-adjusted cruisers forget who and what they are—and nonchalantly wander ashore. This almost always ends in disaster. Why? First off, there’s the cheapness issue. Men and women off multimillion-dollar yachts watch their pennies fiercely. Just because they’re disemboweled or bleeding to death doesn’t mean they’re going to allow their ambulance to pull away for the ER without asking the price—and comparing it to, say, a taxi, bike, or rickshaw ride—to, perhaps, a more reasonably priced medical facility. This is a given. Yachties comparison shop, even at the Pearly Gates, or even lower, which is the more common ‘ultimate homeport’ for yachties. (Part of the reason we retire to the Caribbean is to get acclimated to the heat.)

Oh, the cheapness of international yachties knows no bounds.

If yachties go anywhere on earth and there’s a pay toilet, they just puke in the sink—and count their blessings along with their change.

Part of the reason boaters are so stupid is because they refuse to give ‘a penny for your thoughts’, even to such thinkers as Al Einstein, Ed Musk, or Larry Google—let alone Spike Lee.

And, let’s face it; boaters aren’t above earning a quick, painless profit. I recently flew on a Delta jet to Japan with some schooner trash (a technical term for a specific type of lower-class yachtsman) and we hit turbulence at a high altitude. The oxygen masks flopped down. The sailor nearest me grabbed one, put it under his port armpit, grabbed another, and put it under his starboard armpit—and then donned his own mask and asked my wife and me, “… how much do you want to live?”

He was wearing a ripped, soiled t-shirt with the letters BN in caps. I caught of whiff of his armpit (yes, as per the latest rage in yachtie-style hygiene, his armpit hairs were braided into dreads) as he reached for my oxygen mask. Phew!

“From the way you smell, your shirt should read BM, for bowel movement!” I hissed to him, using up some of my precious oxygen.

“Don’t waste your breath,” my wife said softly as she scanned the rainbow crowd of multihued passengers, “… and his tee shirt informs us he works on yachts while puffing on a marijuana cigarette, as BN stands for Boat Nurse!”

Thank god I married her—she is always scanning the Internet for such useful, little-known nautical facts. I’m sad to say the Internet pages I usually scan lack such information—hell, the models don’t even wear clothes!

Which isn’t to say that we yachties don’t consider things like personal safety, we do. For instance, I wear a special PFD (Personal Floatation Device) just for my Rolex Submariner—because, hey, the bejeweled, diamond-encrusted thing is so big and heavy on my wrist it would drag me down to Neptune’s Locker.

My wife’s Tahitian pearls also have their own custom-fitted PFD. Ditto, my daughter’s piercings both above and below.

Which brings us to the subjects of these boat people in SE Asia and the Med. Won’t they ever learn? First off, they failed to join their local yacht clubs … so how can our yacht clubs offer them reciprocal docking privileges? Second, would it really take so long to clean their topsides? Varnish a cap rail or two? Polish the ship’s bell? Have they no nautical self-respect? And then there’s the whole body mass issue. Don’t they realize that skinny people naturally sink like a stone?

And that sharks don’t really limit themselves to male-only?

Americans are big-as-houses because they’re survivors, dude! Every glazed donut is, like, a small victory for us capitalists. We one-percenters are unsinkable! It is evolution, plain and simple—and if you can count your ribs, you should gracefully and quietly remove yourself from the gene pool.

I hope that doesn’t sound harsh—and, yeah, I’ll have another Big Gulp, thanks.

There is sooooo much misunderstanding when it comes to us yachties. For instance, there are the insurance clauses that come with our marine coverage. My underwriters (Posh, Posh, Cushy, and Rich) demand I agree to recreational muscle use only on my recreational boat. Only commercial craft—and U.S. documented as such—can escape this. Thus, I cannot legally work on my boat, period. Nor can I engage in any other honest work, ashore or afloat. So, while I might appear lazy to a landlubber—I am not. I’m merely law-abiding.

Cockpit napping, aft cabin snoozing, and dinette dozing are the only things I’m okayed-and-insured-for, and THAT’S why I’m so good at them!

Which isn’t to say we yachties don’t get any exercise, we do. Primarily by loudly, repeatedly, slowly, and forcefully telling the local West Indians how we do it back home.

Let’s face it: back home was perfect—that’s why we all left.

Which brings us to the cultural-exchange-thingie: Why is it that if we can learn Bob Marley tunes, the locals can’t learn the lyrics to Moonlight Bay? Or help us read Huck Finn aloud to their children at the local libraries? Or realize that the three-fifths rule in our Constitution was just, like, a silly joke that fell increasingly flat?

How funny would white-face be on a Caucasian, anyway?

… anything can be twisted racial: Eenie, Meenie, Miney, Moe!

My only conclusion: over-sensitivity.

The tropics, of course, present certain latitude-related difficulties. For instance, everyone knows that topical infections can quickly get serious without treatment in an equatorial climate—which is why we yachties drink so much 151! See, we’re not lushes, alkies, and rummies—we’re Infection Fighters! And HAPPY to do it for HOURS every afternoon!

Bill Gates, take note: We yachties don’t get malaria—well, the ones who can afford their nightly rations of G&Ts don’t.

Ditto, drugs. Why, I never caught a common cold while cruising in the 1960s … because the germs thought I was suicidal. Clever, eh?(Like that crazy baby-boomer song says: “Sure, I used to dabble in LSD but now Lipitor and Prune Juice do it for me!”

Some people just don’t understand us or our motivations: who wouldn’t want to go somewhere different, anchor off, unpack the binoculars, and broadcast about the local crime internationally over the SSB and via Noonsite?

Many of the marinas in the Caribbean are locking their dock gates to prevent ingress or egress by the undeserving. (This is gonna be great during a major fire—when the yachties can’t escape and the local firefighters can’t get in.) Recently I was walking by one such dock, when I was waved over by a local St. Thomian with a toolbox in his hand. “Hey, Radio One Marine Report mon,” the fellow called out to me, “have them buzz me out, please.”

I went into the air-conditioned office and patiently waited around for a non-bahn-heer pink fella in a necktie and suit coat, and asked him to buzz the working man out. He peered through the door, squinted, and asked, “What yacht was he working on?”

The manager sighed. It was too hot to go outside into the tropical sun and ask. He shrugged and pushed a button under his counter. “We catch a lot of ‘em this way,” he told me.

My favorite place to haul out is Trinidad. I love that when you pull into Chaguaramas, all the yachties gather around and say, “You can trust Jesse James.”

That’s true. Jesse is a swell fellow, and has helped many yachties over the years. Still, the old-style-gangsta name always shocks.

Perhaps it is all just a matter of cultural perspective. The tourist observes the local and thinks … look how slow he’s moving. The local gazes at the tourist and thinks … dat fool is running-round like a chicken wid de head chopped off!

One of my favorite places in the Lesser Antilles is the Spice Isles. The last time we spent hurricane season anchored off St. George’s, Grenada, we used to go to the museum one night a month for the free BYOB music jam.

Since it was free, it was well-attended by yachties carrying sacks of ice and those clever PFDs which conceal two quart bottles of cheap Cruzan rum.

Anyway, the music was cool and the cultural insights glorious—right up to the moment the poets stepped forward and started reading their work. There’s something about poetry that doesn’t allow PC-sanitized bullshit—and yet allows the measured words of the outraged to channel great pain and pent-up anger superbly. You could hear a pin drop—and then some boater whispering, “Well, it’s past Sailor’s Midnight, honey—let’s beat feet back to Papa’s Hammock.”

Of course, as a live-aboard boater and an ocean sailor for 55 years now—I am guilty of all-of-the-above and much more. In this modern, post-exploration day-and-age there are no Noble Visitors anymore than there are Noble Savages. There are just us folks of all flavors and stripes on a life-raft called Earth—struggling to understand our fellow man, our planet, and our own weird foibles.

There’s plenty of blame to go around.

And, hey, napping in the cockpit in a pre-post-apoplectic floating culture isn’t so bad—especially when the trades are blowing, the sun shining, a rocking reggae band is on the beach, and a wet t-shirt contest about to begin. Why shouldn’t we desire every waking moment of our watery Caribbean existence be a Happy Hour? Why not fiddle (with our boats) while Rome burns?

True, we members of the Lesser Antilles marine community aren’t perfect, aren’t righteous, and certainly aren’t noble. We are just regular folk—no better and no worse. Unless there’s a fine sailing breeze—and then we’re like gone, dude!

Cap’n Fatty Goodlander is the author of Chasing the Horizon and numerous other marine books. Visit: fattygoodlander.com