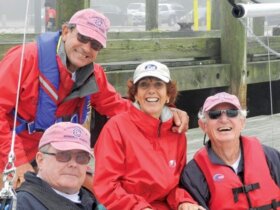 Saying there’s something for everyone is definitely not an overstatement at the Coral Bay Thanksgiving Regatta. In fact, the fleet competing in this 34th annual event held November 27th to 28th on the U.S. Virgin Island of St. John, ranged from a 19ft Nacra beach cat to a century-plus 110ft steel schooner. There were plenty of entries in between, too, ranging from serious PHRF racers to laidback live-aboard cruisers. It’s this fun-loving inclusiveness that has made sailors immediately – and long-term – feel welcome to race and live in the quaint Coral Bay community

Thirteen single-handed entries in three classes: under 30ft, over 30ft but under 40ft and 40ft-plus, along with gaffers and multihulls, raced the first day. Weather conditions proved near perfect with fair skies and light to moderate winds.

“I love to race and this was both a competition as well as a loose, friendly regatta in a fun environment,” says Darrin Keech, who recently moved to the island to start a Caribbean counterpart to his summer Poet’s Lounge Sailing Charters business in Mystic, CT, aboard his same-named Beneteau 41.

“I’m originally a dinghy sailor, so I thought like that when racing. That was my strategy. I got out in deep water away from the pack of boats that was faster than me and could point higher upwind. I knew the Beneteau was fast downwind and that’s where I made big gains,” says Keech.

There was wild weather on the second day for the pursuit-start fully-crewed race. Conditions ranged from dead calm to gusty 25-plus-knot winds and rain squalls over a course that started and finished in Coral Bay after rounding a couple offshore islands. One multihull got stuck at the start line, several boats were becalmed for over two hours and out of the 24 entries that started only half managed to finish in the light air. One, Reality Switch, a Cal 27 owned by Coral Bay’s Denise Wright, won the PHRF racing class.

“What led to our win is my wonderful boat. She does well in both heavy air and light air, and on the second day we had a lot of both,” says Wright, who has raced every Coral Bay Thanksgiving Regatta since 1985. “As most of the racing class boats neared Flanagan, we had heavy wind ahead of a squall line. Once the wind eased a bit and we got around Pelican Rock, the wind then lightened to near nothing, then nothing.

It was truly a ‘Drift Fest’ for over an hour. Once we caught a slight breath of wind, we were able to head west, and get to Le Duck Island. The racers who had been floating becalmed around Norman Island and Flanagan Island came down wind on the new wind just as we were rounding Le Duck. It truly became a good race then, as there were a number of us very close together … I mean ‘Pass the Gray Poupon’ close together. That all made for fun with everyone racing for the finish line.”

The awards party at Skinny Legs Bar & Grill was filled with good music, food and great stories recapping the races.

The Coral Bay Thanksgiving Regatta is a fundraiser for St. John’s Kids and The Sea (KATS) learn-to-sail program, one of several community initiatives that make this a safe haven and friendly harbor.

“KATS has benefited many children in our community,” says Stephen Hendren, commodore of the host Coral Bay Yacht Club. “This includes Paige Clark and Mimi Roller, both of whom are international racers currently seeking Olympic berths.”