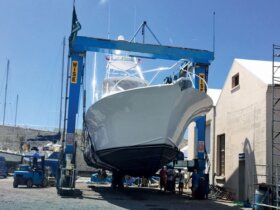 So. Youâ€™ve decided inflatable dinghies are the way to go now that you have to purchase aÂ  tender. Youâ€™ve learned inflatables donâ€™t dent the topsides. And, they stay afloat even when you are caught in a torrential rainstorm. In addition, they have tremendous capacity, so great, in fact, there may be a temptation to overload them. Power choices include sail, oars orÂ  sculling with a single oar, and inflatables offer possibilities for a two- or four-stroke engines, or even an electric outboard. Youâ€™ve learned a lot. But youâ€™re not done yet. There are many more options to consider when purchasing an inflatable.

The Floor
I once walked on water. At least it seemed like it when I rowed ashore in an inflatable dinghy with a thin skin of rubber material for the floor. The dinghy was an early Avon and is still in my garage somewhere. The seat was wood and was the only place to sit while you tried to brace your feet against the rubber floor and row.

Today, you have many more floor options. Zodiac has a wooden roll up floor and an air filled floor to make it easier for you to walk on water. If you want to be more comfortable (and motor faster) you can buy a hard bottomed inflatable (RIB), but they tend to be heavier, require more power and are harder to stow on board.

Tube Material
Most inflatables are made of one or two materials; thermoplastic polymer polyvinyl-chloride, commonly known as PVC or Hypalon, the DuPont trademark name for chlorosulfonated polyethylene (CSPE), a synthetic rubber-like material known for its resistance to extreme temperatures and ultraviolet light. PVC dinghies are usually less expensive because they are heat welded and assembled by robots on a production line. Hypalon tubes have to be glued together by real people.

When buying a dinghy look at the thickness of the tube material. It must be able to resist buckling, abrasion, and to some extent sharp points such as fish hooks or knives. Also, you should take into account the tube dimensions, the number of tube chambers, how the tubes are attached to the rigid part of the hull, and how the other parts; such as the rub rails, handrails, and seats, are attached to the tubes. Most are simply glued on and may eventually come off. If these parts are welded on, they may tear the tube if they are accidentally torn off.

In general, the larger the diameter of the tubes, the less likely it is that spray and water will get aboard. Small-diameter tubes allow water to splash over the sides and can get people onboard wet. The height of the tubes above the waterline also has an effect on the amount of water that comes aboard. Boats with high bow tubes tend to be drier than those with lower tubes. Also check tube shape. Zodiac makes tubes wider at the stern to support heavier 4-stroke engines.

Check the alignment of the rub rails and other parts that are attached to the tubes. The straightest alignments show that the manufacturer either has automatic machinery or has taken reasonable care in this part of the manufacturing process. While looking at the rub rails, you might also inspect their design. Many are produced with a downward facing lip or water deflector intended to throw spray clear of the hull when the boat is underway.Â  Also, make sure the rub rails are constructed of a material that will not leave skid marks along the topsides of the yacht.

The Number of Air Chambers
The number of chambers is another critical factor. In general, there should be at least two chambers, with larger boats having three, four, or even five. Each of the chambers should be capable of supporting more than just the weight of the boat to ensure that the boat stays afloat if a tube is holed.

Tube to Hull Attachment For a RIB
You may not think about how the tube is attached, but if you have to replace a tube this is an important feature. In general, the simpler the attachment, the better. Some tubes have a tape, rather like a luff tape, that slides into a slot in the fiberglass collar. Others have a metal collar bolted onto the hull over a strip of material welded or glued to the tube.

No matter which inflatable you choose, you should spend a little time at a boat show or a dealer and check out all the offerings. Only that way will you be sure you have the right tender for your boat.