An encyclopaedic memory, attention to detail and personable quick witted joie de vivre has led Dick Schoonover, manager of the crewed yacht clearinghouse, CharterPort BVI, in Tortola, to be one of the most recognized and successful in this industry. A native of the U.S. state of Oregon— who never set foot on a boat in his first 29-years except for a brief salmon fishing excursion—Schoonover, who called himself at the time a ‘refugee from the rain’ in the Pacific Northwest, flew sight unseen into St. Thomas days after Hurricane Hugo devastated the island. Several months later, serendipity struck and this Scandinavian history major landed his first job in yachting.

“I was watching football games on TV at a Frenchtown bar New Year’s Day of 1990 when an arm reached out and grabbed me. It was a classmate from the University of Oregon, Sue Collins. A few months later, Sue said she was off to England and leaving behind her position at Regency Charter Services in the old Yacht Haven Hotel. I walked into Regency the next day, applied and landed Sue’s vacated position of central agent. Kathleen Mullen, Regency’s owner, took me under her metaphorical wing and taught me the ropes, or rather, the lines,” Schoonover tells.

Schoonover moved to Tortola five years later at the invite of Tom DeMartine of Seven Seas Charters who had just purchased Virgin Islands Sailing. Since then, he’s worked at Yacht Connections & Caribbean Connections, and for the past dozen years at CharterPort BVI. 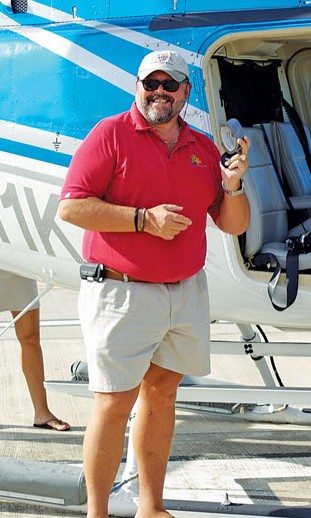 “The single biggest change in the industry since I started has been the internet. Telephones and snail mail ruled everything in the past. Paper brochures were a must. Now, it’s all about having a good webpage with great images on-line,” Schoonover says. “The other is the multihull revolution. We’ve gone from nearly all sailing monohulls and a small portion of diving-oriented trimarans, which looked suspiciously like they were built in someone’s backyard, to production catamarans by far the bulk of the fleet.”

The charter industry today boasts many advantages. In the BVI, there’s a ‘moveable feast’ or in other words lots to amuse the chartering masses. Combine this with the inflation in the size of yachts and the creature comforts they provide and chartering has become far more enticing to many than a hotel or villa holiday, Schoonover says.

On the other hand, one of the biggest challenges in the industry is ever-increasing government taxation.

“In the Virgins, we’ve always been keen to try and present an all-inclusive sort of holiday; it’s easy to sell. This has for nearly 20 years included local taxes.  But when each and every government agency and bureau wants to dip their individual fingers into the charter till, pretty soon the charter yacht owners and crew start shying away from the all-inclusive concept and shifting the tax burden over to the charterer. This seems to be bad marketing strategy to me, both nationally and from the individual yacht’s point of view. The bureaucracy has a way of tainting things. Nothing against paying fair taxes, but the concept or feeling of nickel-and-diming someone is not positive,” Schoonover says.

Sand and sea figures keenly into Schoonover’s play as well as work. A newlywed, who married Tamara ‘TJ’ Alan in August, the two enjoy everything from beach time to visiting other islands such as St. Maarten for short holidays.

In the future, Schoonover sees crewed chartering in the BVI becoming even bigger.

“If taxation becomes more vexing, it would not surprise me to see changes in the method charter fees are calculated (plus-all-expenses versus all-inclusive),” he says. “Beyond this, Virgin Gorda may grow as a basing option; there’s lots of money making the rounds over there.”