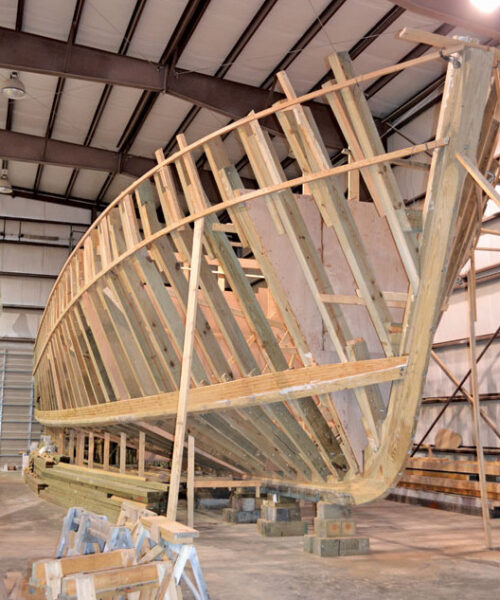 Chadwick Boat Works is assembling what might be the last wooden shrimp trawler built in eastern North Carolina. With the present economy, seafood importation, taxes and regulations, and a reduction in the local commercial fishing industry, there may not be a need for another trawler.

The project provided an opportunity to celebrate the legacy of Harkers Island boat builders. In December, Jamie Chadwick opened his company’s doors to more than fellow 50 boat builders and carpenters, past and present, to critique the work in progress.

Master builder Jamie Lewis built his last wooden trawler in 2000, and Clarence Willis built one in his backyard in 2002.

These men were once in competition, so finding them in the same boathouse is rare. Most of the “old-timer” boat makers and carpenters are in their late 70s and 80s; retired along with their knowledge and expertise. It was time to recognize these masters before it was too late.

Chadwick learned the old ways of boat building as well as the new.

He and his brother, Eugene Chadwick, apprenticed as teens to their dad, Walter Chadwick. Family names such as Willis, Rose, Lewis, Guthrie, Gillikin, Gaskill, Chadwick and others established the best boat building reputations in North Carolina for decades and attracting clients from New York to Florida.

Boats such as the Harkers Island Flare Bow, Round Stern boats, Skip Jacks, sport fishers, trawlers, sailboats and their homemade hydroplanes for racing on Sundays, were coveted. When boats weren’t being built, these men became commercial fishermen, using their experience to redesign their own boats, typically in their backyards.

The flare and shear are like a builder’s unique identifying fingerprints. A boat maker needed to know how the owner would use the boat and the rest was figured out in their heads. Boat specifications were written on a paper bag or piece of wood for reference; there was never a blueprint, but the name of a boat would be referenced as the style to build.

“The design is in your mind,” according to finishing carpenter Wallace Craig Guthrie. “You have to be a master builder before you start building, and then you have to be able to fix anything that needs to be done while you’re working.”

Boat building runs in the blood of Harkers Island families, but when boat builders’ sons couldn’t make the business profitable, the backyard boat builders dwindled. A fortunate few found jobs with other builders dealing with fiberglass rather than wood. Fewer, like Chadwick, opened their own shops for building and repairing fiberglass boats.

This last wooden trawler will be christened the Captain Matt after the owner, Matt Matthews, of Matthews Seafood in Sneads Ferry, N.C.

“When I thought about having a shrimp trawler made, I asked if Jamie Lewis could make it,” said Matthews. “He told me he was retired, but if anyone could build it, it was Jamie Chadwick.”

Everything will be installed at Chadwick’s except for the rigging, done by Matthews.

“This is going to be a modified version of the 58-foot Capt. Kenny’s shrimp trawler, which was built by Jamie Lewis in the 1990s,” Chadwick said of his work in-progress. It has a square stern and V-shaped hull with a 4- to 5-foot draft for the shallow waters around Sneads Ferry and offshore.

The wood frame is expected to take about five months to assemble before being ready for planking, whereas a comparable steel hull can be built in 12 days. The ribs are salt treated pine, held together with stainless steel bolts. The laminated strip planking is rot resistant two-inch Juniper with epoxy and resin on top.

The visit to the trawler resembled a family reunion. The Core Sound Waterfowl Museum and Heritage Center in Harkers Island photographed the group with the trawler in the background. The museum is the caretaker of local histories and relics from eastern North Carolina, including the Jean Dale, a round stern boat built by Brady Lewis.

Onlookers felt like they were among celebrities. “Have you checked it out? Did he start it right?” Heber Guthrie asked Jamie Lewis, as they studied the vessel with Jamie’s son, James Lewis.

“Well it’s too late to start over,” Jamie said, prompting a round of laughter.

Chadwick hopes to have another gathering before the trawler is launched. It may become an annual event.

The shrimp trawler will take many more months to finish, and Jamie Chadwick is in no hurry to see this boat leave the boathouse, possibly ushering in the end of an era in Harkers Island wooden boat making. 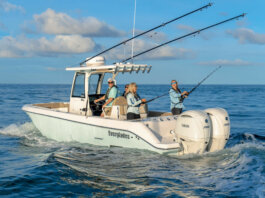 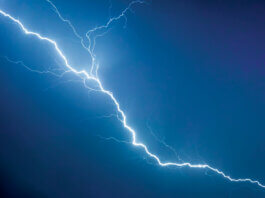 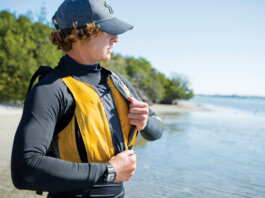