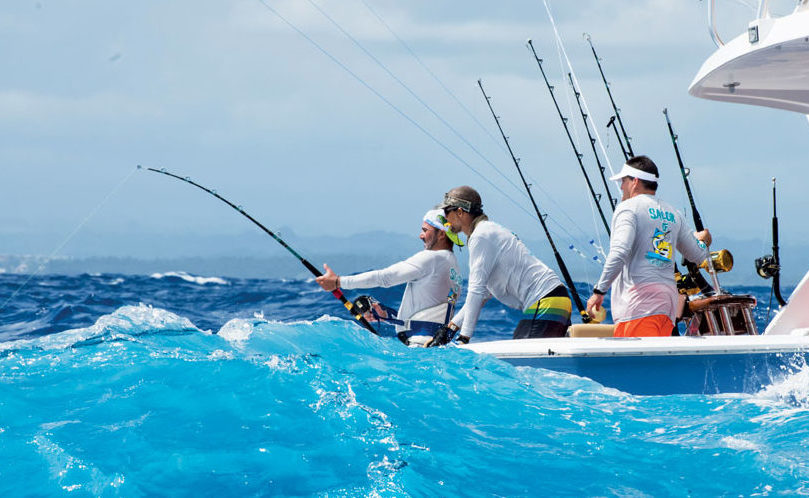 The reel March Madness didn’t take place on the basketball court but in the cockpits of the 16 boats competing in the inaugural all-release Casa de Campo International Blue Marlin Classic. Hosted out of the Dominican Republic from March 20 to 23, the fleet released a whopping 73 blue marlin or an incredible 4.56 blues per boat in the two days of fishing. Frank Rodriguez and his Florida-based team aboard the 70ft Viking Fa La Me released an even dozen blues to take the Top Boat prize

“We caught two fish pretty quick on the first day, which was a nice surprise, then no bites for a while after that,” explains Fa La Me’s Capt. Rob Moore. “Everybody scattered out to other FADs (fish attracting or aggregating devices) but we stayed put and hoped for an afternoon rally.”

The plan worked and the Fa La Me’s anglers released a double-header of blues in the early afternoon. Then, Moore moved offshore to where a couple of other tournament boats reported bites. Bingo! The team released one out of their second double-header of the day.

“The Reel Passion team was fighting its sixth fish when we got another bite,” Moore says. “We knew we had to catch it before them to win the daily prize. Frank put lots of heat on it and we released our sixth fish before them. Pretty exciting stuff since we were about a football field away from each other.”

The second day, Moore ran back to the same FAD and found Fa La Me had the spot all to themselves. That situation seemed sweet at first, but with no bites for a couple of hours and radio reports of other boats in other locations making releases, the team got a little nervous. They decided to stick it out.

“About 11am, we released a blue and it felt good,” Moore explains. “But in Casa de Campo you can catch a triple just as easy as a single so we knew we would not win with catching just one. Next, we released another single then two doubles. The next boat behind us, Reel Passion, caught eight so we had a great lead and everybody was pretty relaxed the last couple of hours of fishing. But we all know fishing is fishing, so we kept making our laps on the FADs, kept hoping for another bite, kept wishing the clock would speed up and the day to be over. It turned out to be a pretty awesome day of fishing to add another six to our six releases the day before. To do it in a tournament was even sweeter.”

Meanwhile, it was North Carolina’s Bill Ingram aboard his 61ft Billy Holton, Reel Passion, who landed the Top Angler prize. “The day before the tournament started we saw eight or nine blue marlin, but couldn’t keep any on the line long enough to make the release, so our hopes weren’t high,” Ingram explains. “The first day of the tournament we headed to a different spot from where we were previously. We like to find our own fish away from the fleet and it worked. We caught six total and I released five. The next day we weren’t so lucky. We released two to give us eight total and second place overall. I released one of them to make six and earn Top Angler.”

“When you combine a superb elegant setting like Marina Casa de Campo with unparalleled blue marlin fishing you have the ingredients for a very successful tournament,” explains tournament director Rick Alvarez, of Florida-based International Billfish Tournaments, Inc. “Plus, when you compare the catch ratio to other famous blue marlin destinations where the winning boat traditionally wins with eight blues through the course of four days of fishing, to 12 blues in only two days, you’re talking about out of this world blue marlin fishing.”