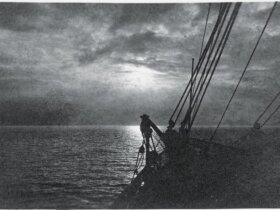 Singing Sands and Boats Too Fast to Hear Them

Every year around the end of July, laid-back Carriacou turns into a hive of activity with the Carriacou Regatta. Cruisers from all corners of the Caribbean gather in Tyrrel Bay to race on their own sailboats or crew on others, colorful work boats line the beaches and the Carriacou sloops are in top condition. This year was no different as the 46th edition of the regatta got underway on July 24th. What better time for the Carriacou Children’s Education Fund (CCEF) to organize their annual fund raising events?

Throughout the year, the CCEF offers free wireless internet (WiFi) in Tyrrel Bay in return for donations, and sailors can drop off items for the auction in July.

When the regatta comes up to speed on the water, the CCEF takes care of a few activities on land. The place to be for these events is the Carriacou Yacht Club. On July 27th, the Annual Pre-Regatta Cruisers’ Potluck Barbecue drew a record 66 participants, who brought meat to put on the grill and a tasty dish, exotic salad or scrumptious dessert to share. Entrance fee was EC$5 per person, drinks could be purchased at happy hour prices and raffle tickets were on sale. Over the span of this fun evening, EC$600 (US$225) was collected.

Proceeds of all CCEF activities go towards school uniforms and supplies, Meals from Keels (lunch for needy Harvey Vale School children) and scholarships to the TA Marryshow Community College. During the regatta period, cruisers donate their skills and talents to raise extra money for the CCEF. This year anyone could join a yoga session or dominoes tournament in exchange for a contribution of EC$5.

With the help of volunteers from the sailing vessels Second Millennium, Dreamcatcher, Boldly Go, Mendocino Queen, Horta, Foggy Mountain, Peter Pan, Zeevonk and Fox-Sea, and employees from the Yacht Club and Tyrrel Bay Haulout, this year’s activities were in competent hands.

The 11th Annual Auction, being the major CCEF event of the year, attracted a lot of attention on July 29th. A table with cheap books, CDs, DVDs and charts, a bargain table and an expansive selection of items up for bid defined the afternoon. Cruisers and locals received excellent deals while bidding for snorkel and dive gear, dive packages, household items, art work, T-shirts, boat parts, electronics – like a new Wirie (marine WiFi system), an unused MP3 player and a satellite phone. Also on offer were jerry cans, outboard engines, a complete haul-out, a homemade deli cake, a relaxing massage, dinner for two and much more.

Principal Brian Lendore and former principal Patrick Compton of the Hillsborough Secondary School paid respect to everybody involved in improving the education of the Carriacou children.

Donations and auction proceeds of the Sue Kingsman Memorial Scholarship Fund will pay for more than two-thirds of the scholarship awards for four students.

While the Carriacou Regatta concluded with a prize giving ceremony, the weeklong fund raising efforts of the CCEF ended with an exciting announcement: Over the past year the record sum of EC$ 20,842 (US$ 7,800) was collected and of that, a total of EC$ 12,759 (US$ 4,780) was collected during regatta week. This now brings the grand total to an impressive EC$ 150,000 (US$ 56,180)! Good news for the driving-force behind the organization and an encouragement for all who visit Tyrrel Bay in the future, to drop off (un)used boat gear or other donations for the kids of Carriacou.

Liesbet Collaert is a former teacher and freelance writer who lives and cruises on S/V Irie with her husband, Mark. For more stories and pictures, check out their website www.itsirie.com and her blog http://xwaters.com/blogs/liesbets-blog

Liesbet Collaert
View More Posts
Liesbet Collaert is a freelance writer. She and her husband Mark have been cruising on Irie for almost six years. They recently left the Caribbean and are heading west for new adventures in the South Pacific. Visit her blog at: www.itsirie.com