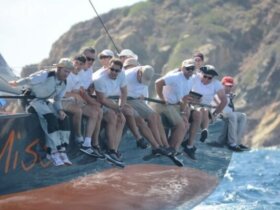 The pronouncement on the International Optimist Dinghy Association (IODA) website says it all: Caribbean triumph!

“Ten or even five years ago the idea that the top four places at the championship would be taken by sailors from the Caribbean would have been unthinkable. But at the completion of the scheduled 12 races, Ian Barrows of the U.S. Virgins emerged a clear winner, with 2006 North American champion Iván Aponte (Puerto Rico) leading three Puerto Ricans next in the ranking. With Just van Aanholt from Curaçao in 13th and Nikki Barnes (ISV) taking girls’ silver, the elation of the islanders is understandable.”

“Concentration,” is how 13-year-old Barrows described his success. He, and 189 competitors from 15 nations in South America, North America and the Caribbean battled conditions that ranged from 25 to 30 knots of wind on regatta’s first day of sailing to less than half that the last day.

"I enjoyed the competition very much,” says van Aanholt. “It was my best result ever and even the best result for the Netherlands Antilles in a regional Optimist event. The racing area was spectacular. There were great winds with a lot of good waves. I also enjoyed sailing with a desert around me.”

The U.S. Virgin Islands’ Nikole ‘Nikki” Barnes rounded out the medals for 15th overall and took silver, or second overall, out of 54 girls. Going into the last day, Barnes was 16th overall and 4th place girl.

“Since it was the last day and we only had one race, I knew I had to put my all into it or nothing, and I put my all. That’s how I moved up,” says Barnes.

Puerto Rico won the Nation’s Cup Team Racing Championship. “We entered two teams in the Nations Cup from Puerto Rico,” explains Ramon ‘Pirul’ Gonzalez, president of the Puerto Rico Optimist Association. “Part of the inspiration behind the winning team’s win was the fact that a small Caribbean island could triumph over sailing super power nations. The Puerto Rican team is also the 2007 Nation’s Cup winner from the Optimist North American Championships in Mexico.”

Gonzalez adds, “The Caribbean region is now in the eyes of the international youth sailing community. Our main goal this year is to bring new kids to the Opti Programs and keep the good level for years to come.”

Over the weekends of the 16th-18th and 20th-24th of March, British Virgin Island sailor Alec Anderson competed in both the Club 420 and Laser radial mid-winters regattas, located in Jensen Beach Florida, and Clearwater Beach Florida.

At the Club 420 midwinter championships, Anderson and crew Rian Bareuther from St. Thomas teamed up to take on the 76 other two-person boats with many top high school and college sailors..  Over three days, results posted by Anderson and Bareuther would include two third place finishes, three fifth place finishes, and two sixth place finishes to end up in a respectable ninth place overall out of 76 competitors.
They were also the top finishing Caribbean team in the regatta, with Tyler Rice and Olin Davis from St. Thomas finishing 26th overall.

With one day of rest, Anderson drove west to the 2008 Laser Radial Midwinter East regatta, an International Sailing Federation grade one event, with points going towards the sailor’s world ranking. Top international Laser Radial sailors participated including World Sailor of the Year and two-time world champion Paige Railey of the United States.

With no racing on both the Saturday and Sunday due to thunderstorms and lack of wind, the race committee called it an event after only six of the 10 scheduled races were held.  This left Anderson in 28th, and third out of the Caribbean sailors.  Editor’s Note:   Other Caribbean sailors who competed in the Laser Radial Gold Fleet with Anderson were Max Nickbarg, St. Thomas, who finished 13th and David Alfonso, Puerto Rico, who finished in 24th place.  Mayumi Roller of St. Thomas finished 33rd.  Also participating, in the 4.7 class, was Carmen Rivera from Puerto Rico who finished 19th.)

Special congratulations are due to Raul Aguayo of the Dominican Republic who finished first in the Laser Class in Clearwater, followed by Caribbean sailor Hugo Roller, St. John, USVI, 30th, and Patrick Carolus, Puerto Rico, 44th.