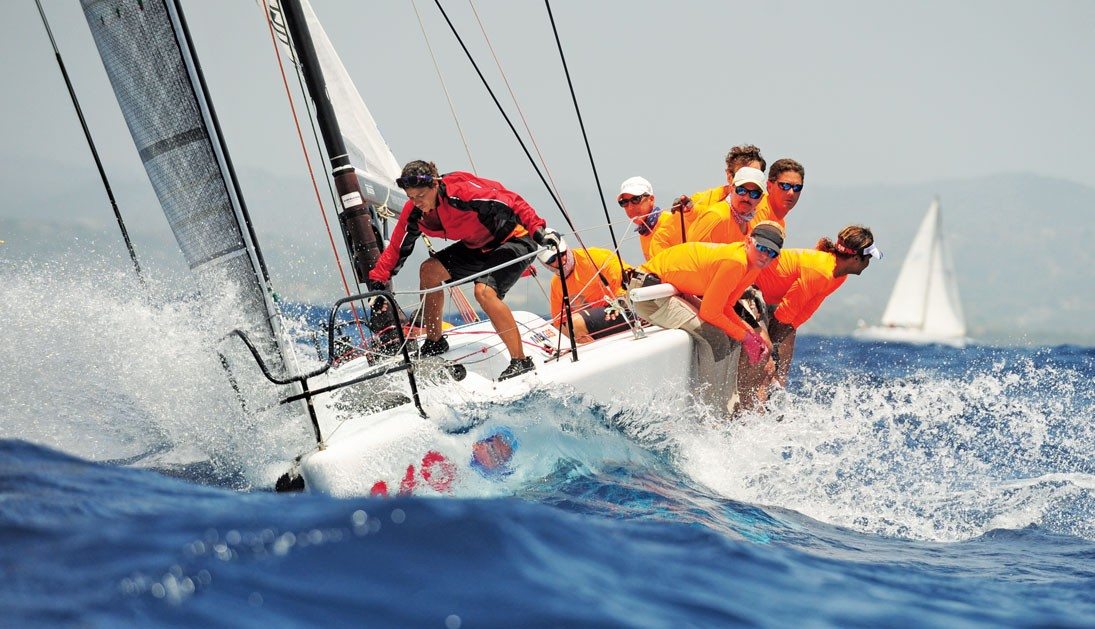 The Caribbean’s junior sailors continue to put the region on the global sailing map—and their performances at the Optimist World Championships in Cagliari, Sardinia, Italy from July 22 to August 2 were no exception.

Out of 251 sailors hailing from 55 countries, competing in a total of 13 races in conditions that ranged from light to a blustery 32 knots, the U.S. Virgin Islands’ Ian Barrows led the Caribbean delegation with a 12th place finish. While this score doesn’t set a regional record, (Trinidad & Tobago’s Matthew Scott finished 7th overall in the 2004 Optimist Worlds in Ecuador,) it does set a Virgin Islands record as well as Barrows’ own personal best in international competition.

The 12-year-old St. Thomas sailor said, “I think I was so successful because of boat speed. I hiked out a lot when it was blowing hard. In the windiest races it was more survival. I also had pretty good starts. Argy (Coach Agustin ‘Argy’ Resano) helped me with my strategy before most of the races. I stuck to our plans.”

Jose ‘Quino’ Nigaglioni, from Puerto Rico and who serves as IODA’s Vice President, says, “I think we are getting very close to a World Champion. Ian (Barrows) is only 12 years old and Ivan (Aponte) still has another year.”

“It was the most competitive Worlds I have ever competed in,” says van Aanholt. “In heavy weather, I tried to finish as high as I could. So, I went for the top places. In lighter winds, which are not my strong point, I tried to keep my losses as small as possible.”

New Zealand’s Chris Steele won the 2007 Optimist World Champion title; the first time a New Zealand sailor has won this event. Greece earned the Team Racing Trophy. The USVI Team was the only Caribbean nation to make it into the Team Racing Championships. Seeding for the championships is based on the results of the top four sailors per team in the first five races including discards. Surprisingly, Peru, the USA, Great Britain and Japan, usually strong team racing nations, failed to make the championships this year.

USVI coach Resano says, “I think it was a really good accomplishment to make the team racing. That says we have a strong team. My goal for the team was to make team racing and place three sailors in the top 50. Even though it was a high goal from last year, we almost did that.”

What’s ahead for Optimist Sailing in the Caribbean? Cor Van Aanholt, who heads up Curacao’s Youth Sailing and who will welcome the Optimist North American Championships to this southern Caribbean island from June 28 to July 6th, 2008, explains, “At the Annual General Meeting in Italy, it was decided that a Central American & Caribbean Optimist Championship, sanctioned by IODA, will be held during the Easter holiday in Trinidad in 2009. The idea is that the second best sailors, those that do not qualify for either the Worlds or the North Americans in that year, will get an opportunity to participate. In this way, young sailors from the quickly developing countries in the Central American and Caribbean area will have chance to experience big fleet championship in their area.”

Nigaglioni adds, “This event will also serve as an exercise for local coaches, sailors, judges, and race officers who will learn about major regatta procedures. Entries will be open to all IODA members that are eligible to participate in the Central American and Caribbean Games. Each country will be allowed to enter a maximum of four sailors, with no more than three of the same gender.”

Also in 2009, the Dominican Republic will host the Optimist North American Championships out of Santo Domingo.