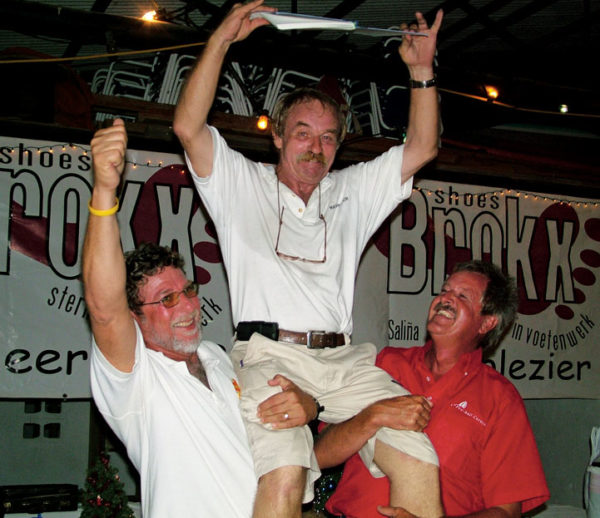 At the end of every year the committed sailor, race director and judge for numerous years Ivo van Dooren gets into the spotlight as he is keeping a great sailing tradition alive. On December 30 he organized his 35th End of the Year Race, a pursuit race that is said to be the most vibrant and challenging sailing event in Curacao.

During sailing regattas the attention is mostly focused on the races and the best performing sailing teams, but without a thorough preparation and guidance by an expert race director, timekeeper and accountant no race can take place. Ivo van Dooren is such a centipede. Various race and regatta organizations can count on him year after year for more than a quarter of a century.

For Van Dooren, the sailing sport only became an unmistakable part of his life after his arrival in Curaçao in 1979. The Dutch hydraulic engineer, born in Twente near the German border, left for Peru after completing his studies in the United States, where he volunteered to avoid compulsory military service. He put his knowledge straight into practice during the reconstruction after a catastrophic earthquake in the South American country. After the contract, he tried to find work again in South America, but ended up in Ghana, where he worked for a Dutch engineering firm in agriculture. His wanderings then led him via Suriname, where he worked as a bridge builder, to Curaçao where he chose domicile after six months, while working in Caracas. Soon he was asked to sail along with American friends, which led to the purchase of the Twente Ros a 23 foot Aquarius. This opened up the possibility to participate in regattas. “That’s how I got involved in racing”, Van Dooren reminisces. “In 1984 I was introduced by the late Kees Rademaker at Asiento Sailing Club, but only when I became a member of the Donderlingen, a club of skilled sailors which still maintained a balloting at that time – I really learned to sail. The Donderlingen still exists, but the club is grayed up with an average age of no less than 68 years!” Van Dooren says with a hint of melancholy. 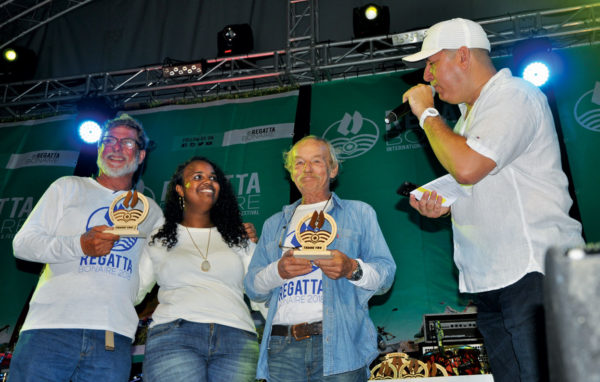 “And then the Bonaire Regatta, which experienced the 51st edition last year, came around. As long as I had the Twente Ros I competed myself, but after the sale of the boat, and the cancellation of the purchase of another boat, I was asked for the race committee and I liked it. There were complaints about the organization in the past, buoys were missing and it took forever before the results became known. I myself hate disorganized activities, whether it is at work or in sport. With solution-oriented thinking we quickly realized improvements, also in dealing with protests. And there were new technical developments. For example, we clocked with the GPS. And the rating systems were further examined and updated. A great number of different factors need to be taken into account. Despite we try to do our best, the ratings remain a tricky issue. They are causing criticism among sailors who do not know the exact details, but they allow a diverse racing fleet to compete on an equal footing.

The use and application of the ratings is not the only task Van Dooren has performed through the years. His job starts with the creation of competition tracks and finding a suitable location. This used to be done on a map, but has now been replaced by GPS and Google Earth. “The weather conditions, speed of the participating boats and location have to be taken into account. Then sailing instructions must be drawn up, which nowadays require extra attention in the environmental field.

Every race requires at least 24 hours of preparation. “Too much work for a single person, that is why at the end of the eighties the CYA, the Curaçao Yachting Association was established, first unofficially, but now with its own regulations. Edwig Fontilus and Marc van Nes have been assisting with the starts for several years. The organization however remains a challenge because it cannot cost anything.

“Before and during the actual race, buoys are laid and a start and finish are arranged, with sometimes a break moment – with an extra finish and start – to promote the fun and solidarity. And immediately afterwards the results must be calculated and protests handled. In between I follow the course of the race both on land and at sea. That’s a lot of work but I’m happy to do so,“ Van Dooren enthusiastically admits. “Except for the speech at the prize-giving ceremony, it usually gives me headaches.“

During each sailing race it’s evident that Van Dooren volunteers and remains the stable and indispensable factor he has been in Curacao for 35 years, not only in the organizational field but also socially. His door is always open and he enjoys a solid international reputation as a reliable organizer and judge. He is also a board member of various sailing clubs and organizations on the island.

Van Dooren has recently been recognized and decorated by the Dutch King Willem Alexander as a Knight in the Order of Oranje Nassau, the crowning of his selfless dedication. Well deserved.