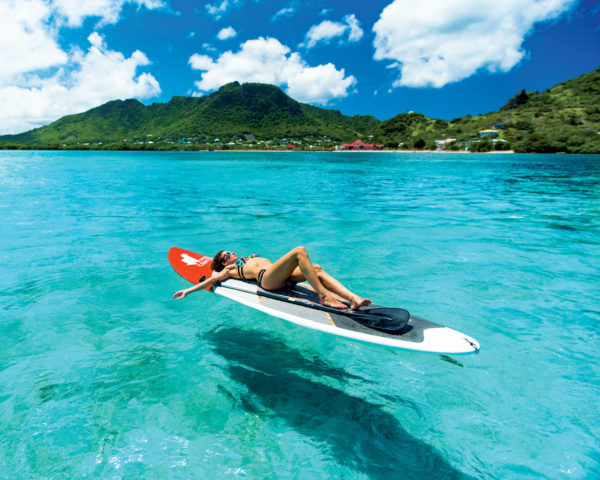 “After leaving the busyness of the US and its often-crowded harbors, it is very special to spend a week on the open water and not see anything or anyone but the occasional passing tanker or playful dolphins racing across your bow. Then, the water starts to change colors – yes, Caribbean blue is real – the trade winds become warm and steady, and you see land for the first time in a week. You hear the sounds of a steel drum band as you pull into your marina and hand off your lines to your sailing friends who have arrived ahead of you who welcome you with a smile and a rum punch. You meet up with new and old friends during sunset happy hours to plan your sailing season in the Caribbean. It doesn’t get much better than that!”

The Cunningham’s of Park City, UT, veterans of six ARC Caribbean 1500 rallies and participants this year in the ARC (Atlantic Rally for Cruisers) to St. Lucia, certainly make the point that half the fun of any journey is in the getting there and the other half is in the arrival. This fall, Harbour Island in the Bahamas and five Caribbean Islands are the destinations for a number of cruising rallies departing from both the U.S. and Europe.

In past years, the Salty Dawg Sailing Association’s (SDSA) Fall Rally to the Caribbean, which departs from Hampton, VA, on November 2, offered Marsh Harbor, in the Abaco Islands as one of two endpoints. This year, due to Hurricane Dorian devastation, the Dawgs will be headed to Harbour Island, just east of Eleuthera.

“We offer a Bahamas destination for those working up to longer offshore passages or who need to have their boats closer to the U.S. over the winter for personal or business reasons,” says Hank George, SDSA president.

The fleet is expected to arrive first in Spanish Wells, a small town on St. George’s Cay, less than one-third mile off Eleuthera Island’s northern tip. Peggy Huang and David Crafa, long-time SDSA ralliers aboard their Hylas 54, Vanishing Point, and this year’s port captains for the Bahamas, have arranged for local pilots to guide boats safely through the shallow jagged reef called ‘Devil’s Backbone’ to Harbour Island. The host marina, and centerpiece for SDSA activities including the arrival dinner November 12, will be Valentines Residences, Resort & Marina or the Romora Bay Resort Marina.

“There are plenty of resources for arriving sailors to utilize in Harbor Island, from easily accessible grocery stores to chandlers, great restaurants and bars. The town itself is a wonderful destination to stroll through and browse the local shops. It’s not a touristy place. Plus, its accessible via dinghy,” says Crafa. 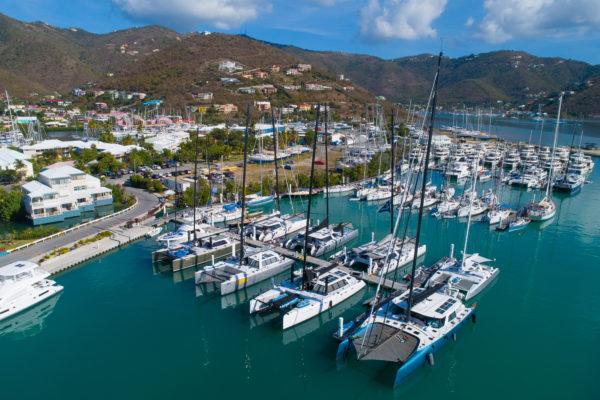 The ARC Caribbean 1500, which new this year starts  from Gloucester Point, VA (York River Yacht Haven), on November 3 and is organized by the Cowes, UK-based World Cruising Club (WCC), has long made landfall in the BVI.

“The BVIs provide some of the world’s best cruising, offer exciting dining and leisure opportunities, and there’s top-level marine facilities,” says Jeremy Wyatt, the WCC’s communications director. “Nanny Cay Marina on Tortola, the hub for our social events including the annual 1500 beach volleyball contest, is an ideal base for keeping a boat through the Caribbean winter season. One of the options that is becoming popular is Nanny Cay’s ‘Dry Sail’ program.”

This program enables yacht owners to pay for one haul out and the storage upfront then get up to 5 free hauls and launches.

Ralliers will find a new service when cruising the BVI. BoatyBall (boatyball.com) enables boaters to reserve a mooring ball in advance via a small phone app. It’s ideal for especially popular anchorages.

The availability of yacht repair services, easy airlift to the U.S. and inexpensive dining and drinking options are why Hank Schmitt, founder of the North American Rally to the Caribbean (NARC) and chief executive officer of Huntington, NY-based Offshore Passage Opportunities, chose St. Maarten as the end destination. Specifically, the NARC will depart October 26 from Newport, RI and Little Creek, VA to IGY’s Yacht Club at Isle de Sol in Simpson Bay, via a stop-over in Bermuda.

“The NARC boat’s arrival marks the start of the Caribbean boating season,” says Schmitt, who adds the rally celebrates its 20th anniversary this year. “IGY hosts a party and other sponsors such as Budget Marine, FKG Marine Rigging, Bobby’s Megayard and the St. Maarten Yacht Club and Heineken Regatta are all part of the big welcome to the NARC fleet. ”

Antigua is a great sailing destination with lots of services, and positions boats well to continue down the Leeward and Windward chains without having to find a window to slog to windward as one often had to from the BVI, according to SDSA’s George. “The island has been a great location for the last two years and continues to be a destination for our Fall Rally.”

To be in English Harbour’s Nelson’s Dockyard, says Robert Osborn, who with wife Brenda, have cruised extensively with the SDSA aboard their Aerodyne 47, Pandora, “or anywhere in that general area is very special given the history.” 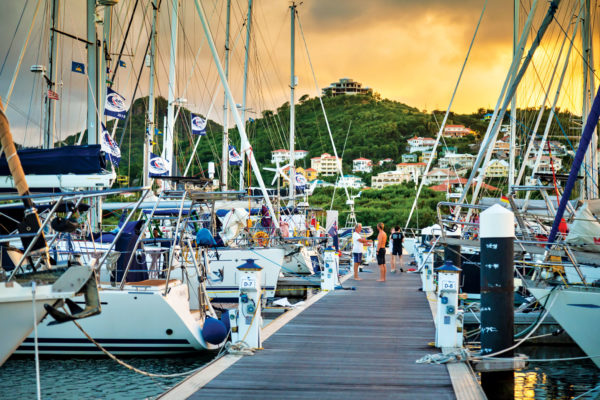 This year marks the 30th year that the WCC’s Atlantic Rally for Cruisers (ARC), which departs Las Palmas de Gran Canaria on November 24, will arrive in St. Lucia. This year, as in the past, IGY’s Rodney Bay Marina (RBM) in Gros Islet, is the rally destination.

New at RBM is an internet upgrade within the marina for patrons and two new restaurants: La Mesa, featuring South American cuisine, and the seafood themed Sea Salt Café.

The ARC + St. Vincent, departs from Gran Canaria on November 10, bound for the Blue Lagoon Marina. It’s a location WCC organizers first pioneered in 2018, with ralliers reviewing the island as an ‘authentic Caribbean’ experience. The Marina has an onsite hotel and, says the WCC’s Wyatt, “an exceptionally friendly staff who delight in welcoming ARC+ arrivals to their island.”

“There will be a welcome party at the marina for participants to unwind and mingle with each other and local stakeholders. We also organize several complementary familiarization trips to the capital, Kingstown, and nearby sites like the Botanical Gardens-oldest in the Western Hemisphere, says Natasha Anderson, marketing officer for the St. Vincent and The Grenadines Tourism Authority. Beyond that, “our destination is home to a host of natural escapades like trekking through the rainforest at the Vermont nature trail, hiking up over 4000 feet to the active La Soufriere volcano, diving one of our many sites to explore the habitat of our unique critters or sailing through our archipelago and picnicking on one of the deserted Tobago cays.”