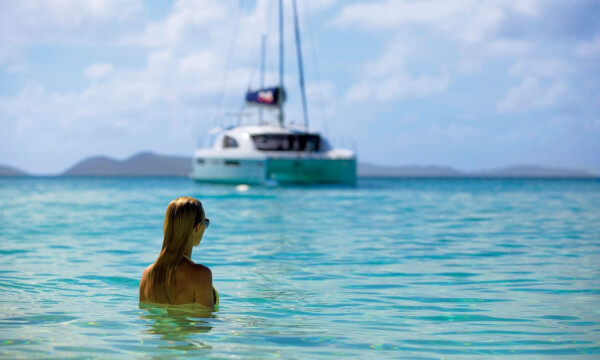 What’s hot when it comes to the Caribbean’s charter industry? All At Sea asked over half-a-dozen companies from South Florida to Grenada to share their thoughts on ten topics.

1. Everyone Charters – Seriously
“The most exciting trend to me is that today’s charter guests come from all over the world and from all walks of life,” says Ian Pedersen, marketing manager for The Moorings – North America, headquartered in Clearwater, Florida. “Couples, singles, young families, retirees, North Americans, Latin Americans, Europeans.”

More specifically, Barefoot Yacht Charters, in St. Vincent & the Grenadines, welcomes three-fourths of its guests from North America, split roughly equally between the U.S. and Canada, with a smaller percent from Europe, principally the UK, but also from Italy, Spain, Germany and Scandinavia. “Over the past 18 months there’s been an increased number from Australia and Brazil,” says director Narendra ‘Seth’ Sethia. “As for Brazil, there are now weekly non-stop flights from Sao Paulo, Brazil to Barbados.”

Megan Wilson at Conch Charters, in Tortola, BVI, says most people that bareboat charter are avid sailors. “However, the families and friends they bring with them don’t necessarily know how to sail.”

2. Number One Question – Comfort!
The number one question asked by clients of Clearwater, Florida-headquartered MarineMax Vacations, which has a base in the BVI, is about living comforts, including large cabin layouts, says Raul Bermudez, vice president of the charter division. “They want to know if boats are equipped with the conveniences of a home. This means air-conditioning, water makers, Wi-Fi and electric toilets. They don’t want to rough it. It’s the same for bareboat and crewed charters. For crewed, they also want to know there is flexibility in menu preferences and exactly what is or is not included.”

Beyond this, Barefoot’s Sethia says crewed guests ask about price first, then weather conditions, the crew, the yacht’s configuration, on-board amenities, itinerary and meals. For a bareboat, its itinerary, followed by weather and ease or difficulty of sailing conditions within the location. “A hugely increased area of importance for bareboaters is on-board electronic navigational equipment,” he says.

“Power catamarans, a relative newcomer to the industry, open the world of chartering to an entirely new segment of the yachting market. It allows power boaters to explore exotic destinations without learning how to sail.”

5. Crews Gaining Ground
In general, “yachts under 50-feet are mostly bareboat and the stronger market, while crewed yachts start at 55-feet and up,” tells Jim Veiga, owner of Sail Caribe Yacht Charters, in Fajardo, Puerto Rico.

Interest in bareboat charters remains very strong, says The Moorings’ Pedersen, “however, crewed and skippered yacht charters have seen tremendous growth over the past few years.”

Barefoot’s Sethia agrees. “Because the bareboat leisure sailing industry is relatively young, perhaps 40-odd years old, there are many folks who were the ‘first generation’ of bareboaters who are older now and coming back for a fully crewed charter. I think this will grow steadily.”

6. Crewed Yachts – that Special Touch
Welcome letters of introduction and phone conversations before the charter, says Select Yacht’s McHorney, “get it all off on the right foot.”

Once on board, the service level of a crewed yacht charter sets it apart automatically, adds The Moorings’ Pedersen. “From finding secluded coves to reserving the best mooring ball and helping to plan out the entire itinerary, the crew provides a level of relaxation that goes well beyond what one would experience on a bareboat charter.”

Some crewed yachts are trying creative pricing options like half-board, no dinners aboard and captain only, according to Dick Schoonover, manager of the crewed yacht clearinghouse, CharterPort BVI, in Tortola, BVI. “I don’t think they work. Generally, the special rates are pricing discounts, and not ‘adding value’ to the existing charter fee. It creates a question: “If you can do charters for this price, then are you over priced normally?”

“We tailor every charter to the individual charterer’s needs and what they would like to do. In addition, we offer personal chart and boat briefings, complimentary extras such as taxi vouchers to the supermarket for provisioning and complimentary ice vouchers from the marina office.”

“We have upgraded our boat systems’ manuals to Galaxy Tablets and offer a pay as you go Wi-Fi service onboard each of our vessels.”

“Most customers start out with the smaller yachts and move up to larger ones after they have cruised the area and built confidence navigating the waters. They fall in love with the islands and when they return, they bring family and friends on the larger yachts,” says MarineMax’s Bermudez.

On one hand, “U.S. elections and Zika could be factors driving more uncertainty this year,” says Horizon’s Pascall. Plus, “the UK market has been severely impacted by Brexit and exchange rates.”

However, Barefoot’s Sethia sees clear skies ahead. “In the past two years we have seen folks book nine to 14 months in advance rather than three to four months. This is likely because of improving economic conditions in the guest’s country of origin.”

10. Looking to the Future
“I think the charter industry is on the verge of becoming a vacation option for a more mainstream audience, and as the power and crewed yacht products continue to evolve and grow, so too will the industry as a whole. It is certainly an exciting time to be a part of the charter industry,” says The Moorings’ Pedersen.