ALL AT SEAThe Caribbean\'s Waterfront Community
HomeCharterCaribbean Chartering: Why Catamarans Are So Popular
Charter

Caribbean Chartering: Why Catamarans Are So Popular 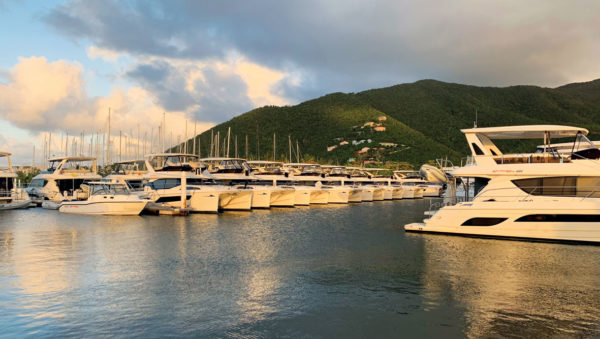 There was a time when monohulls ruled the Caribbean charter fleets. No longer. While mono or single hull vessels are still available, it is two hulled vessels or catamarans specifically, that are now seeing a rising tide in demand. This is true throughout the Caribbean, for bareboat and crewed charters, and for sailing as well as power yachts. The desire for two hulls over one is not a fashion without foundation. Indeed, there are many advantages to multihulled vessels. Yet, cats aren’t for everyone.

“The popularity of catamarans has dramatically increased,” confirms Raul Bermudez, vice president of Clearwater, FL-based MarineMax Vacations, with bases in the British Virgin Islands (BVI) and Bahamas. “Twenty years ago, the percentage of catamarans in charter fleets was less than 5 percent. Now, including our fleet of 100 percent Aquila power catamarans, I believe the BVI charter fleets are close to 50 percent catamarans.”

MULTI-ADVANTAGES – THE THREE S’s
Space, stability and shallow draft are three key advantages to chartering a catamaran for charter:

“Catamarans provide a vast living space,” says Patty Angell, U.S. marketing manager for Annapolis, MD-headquartered Dream Yacht Charters, which offers a fleet of over 350 yachts in nine Caribbean islands. “This space is conducive for a group, be it families with kids or multigenerational trips or two to three couples, as everyone can be in one place, such as enjoying meals together, without feeling cramped. More space also gives more privacy to guests as well as better layout options from which to choose.”

A large main salon and the cockpit on the same level as the salon are two reasons for this roominess. Others are “comfortable forward trampolines, plus fly-bridge decks on a majority of the newer-style yachts,” according to Lynne Campbell, who with husband Joe, are yacht charter brokers and owners of Carefree Yacht Charters, in Fort Lauderdale, FL.

This spaciousness, “is especially important in destinations where a lot of time is spent at anchor and in marinas,” adds Debbie Veiga, owner with husband Jim of Sail Caribe Yacht Charters’ base at the Puerto del Rey Marina, in Fajardo, PR.

A catamaran’s design can make access to the ocean typically easier with port and starboard transom steps. Plus, says Jody Krebs, marketing manager for the Americas with Clearwater, FL-based Sunsail, who continues to add cats to its fleets at bases in the Bahamas and Belize as well as five Caribbean islands, “More often than not, dinghies will be on a raised davit system for transport from island to island.”

There’s less rock and roll aboard a catamaran.

“This yacht style provides superb stability while at anchor as well as under sail, making a catamaran an ideal choice for first time charterers or families with kids,” says Carefree Yacht Charters’ Campbell. .

A shallow draft, rather than a deep keel characteristic of monohulls, means it’s possible to get closer to shore.

“You can anchor in much shallower water, near beaches and other stops with a catamaran. This is why they are more present in destinations such as the Bahamas, where the water is generally shallower,” says Dream Yacht Charter’s Angell.

There are two other advantages of catamarans.

First, “they don’t burn as much fuel as a power yacht will,” says Ann McHorney, founder and director of yacht charter brokerage, Select Yachts, based in Fort Lauderdale, FL.

Secondly, catamarans are an especially good option for skippered vacations, adds Sunsail’s Krebs. “Many have a forepeak cabin for the skipper leaving the hulls for charter guests.”

THE DOWNSIDE OF CATS
It’s hard to think of any shortcomings to being out on the sea. However, when comparing mono and multihulls, there is definitely a difference.

“Sailing traditionalists will sometimes insist on a monohull as they enjoy an exhilarating sail plus feeling the true power of the wind under sail,” explains Carefree Yacht Charters’ Campbell.

Some destinations, such as those with long upwinds and/or lots of bluewater rather short island-hopping passages, primarily attract monohull sailors.

“A monohull responds to sailing maneuvers more quickly than a catamaran. A monohull will also typically be the less expensive option for charter vacations as well,” says Sunsail’s Krebs.

Beyond this, catamarans will continue to dominate as the number one yacht style, Carefree Yacht Charter’s Campbell foresees. “Within the catamaran category itself, sailing catamarans are the most popular option with their ability to motor as well as sail from island to island. However, power catamarans are gaining popularity among owners and clients alike with their ability to move about the islands more quickly. They also offer our traditional motor yacht client a newer and more affordable power yacht option.”