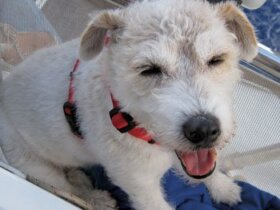 For some strange reason, a tremendous number of Caribbean sailors are currently hanging out in Vava’U, Tonga. I have no idea why. Perhaps their mooring pennants rotted, they drifted through the Panama Canal in a daze, and are just now realizing they are far off their DR position—and, well, far, far out too. Another possibility: the nearly deserted isles of Tonga are culturally similar to what the Caribbean was like when they first arrived in the Lesser Antilles back in the day. In any event, I’m here in Tonga and surrounded by the very same adventurous folks I was once-upon-a-time sat drinking with at Turtle Pier in Sint Maarten; on Hog Island in Grenada; in Le Select on Barths; at Village Cay on Tortola and in Skinny’s on St. John.

Speaking of St. John, USVI, where I headquartered for a couple of hazy decades; my favorite bakery in Cruz Bay was Baked in the Sun. There are a lot of baked people in Love City, true, but few Coral Bay waterfront wackos ‘get it together’ enough to run a business. Currently, KO runs the place—and, yes, KO is a knock-out lady. But Baked in the Sun was founded by a dynamic young bakery-broad by the name of Kim.

She was the original driving force behind the business—which soon turned into a cross between a hip bakery and a Caribbean coffee shop. It was an instant success. The local continentals felt particularly comfortable there—as Kim assisted them with many difficult tasks (like counting their change).

Kim was perfectly happy and fulfilled and, let’s face it, Gloria Steinem was right—a woman needs a man like a fish needs a bicycle.

Enter a devilishly-handsome single-hander named David, who sailed into Coral Bay a few years later on a 29ft wooden sailboat from Florida, and decided it was time for a lifestyle change. Dave is a very straight-ahead young fellow—the type of quiet, unassuming guy who subtly gets what he wants when he wants it without excessive fuss or too much notice. And he’d recently decided that—as swell as singlehanded cruising offshore was—he wanted a wife and family too. And, yes, there was one more thing: Dave had a sweet tooth—and found confectionary sugar to be an aphrodisiac.

The thing I find most admirable about Dave is his straightforwardness, his literalness. He has a clear vision of who he is and where he’s going. Thus, when he wanted to ‘put a bun in the oven’ he marched right into Baked in the Sun, asked to see the baker, and, well, ‘the rest is history’, as they say.

Once David and Kim Edwards had a child—they decided to refocus on the important things in life; mainly goofing around, laying around, and sailing around. They sold the business and moved aboard their Cheoy Lee Offshore 44 named, appropriately, Flour Girl.

They decided to home-school (well, boat-school) Zack, and have the entire watery world be his moving, ever-evolving classroom.

Zack is turning out to be a highly personable, well-behaved, well-adjusted kid. He is currently learning how to boogie board, surf, and sail a small dinghy. To say he’s a self-assured, confident, independent youngster is to make an understatement.

When I recently met back up with Kim and David in Neiafu, Tonga, in the Vava’U group, I immediately asked Kim where Zack was.

“… gosh, time flies,” I mused. “I would have thought he was still in diapers.”

Their plans? Maybe New Zealand for the summer. Or maybe not. They’re hanging loose, as we used to say. The last time I saw them was at a local beach event, and, yes, Kim was doing the baking.

All three of their smiles were as wide as the Pacific.

There are times when the Pacific feels like it is filling up. There are so many familiar boats and so many Lesser Antilles cruising couples that we originally met in the Caribbean—that it is hard to keep track of ‘em all.

Why, there goes the fiddle-playing Ragin’ Cajun, who we last saw while transiting the Panama Canal.

… and that lovely little black ketch Waka Irie of the Virgins as well.

Is that Michael, Melinda, and Master Ben of the 120ft sloop Gliss?

And there goes Diana and Ross of the catamaran One White Tree (a J.R.R. Tolkien reference) who was introduced to us by Caribbean sailors Barbara (a fellow writer) and Stuart (charter captain) aboard La Luna.

Moorea was another island brimming with Caribes. We bumped into Doug-the-Sailing-Sculptor from Marigot, St. Martin aboard the hundred-year-old iron-hulled Sindbad while there, also Lon and Rosie of Flying Circus. (Actually, Flying Circus is still in Coral Bay, with Lon skippering the large steel motor yacht Askari out of Tahiti.)

Of course, Vava’U has an annual regatta—which I, ever-the-professional marine journalist, covered in depth. No, I don’t remember the official name of the event but I do remember that a white sloop won it … surprise! But while I was demonstrating my journalistic incompetence (and multi-tasking by drowning in my kava bowl) I happened to notice a big blue Beneteau 52 Clipper named Corina IV with a wildly gyrating Watusi dancer on its sugar scoop.

During the light-air race they were playing reggae music loud enough to awake Donald Crowhurst—and were duking it out for last place with a Lyle Hess 24 named Destarte.

“That rings a bell,” I mused to my wife/business manager Carolyn.

“It should,” she said. “They sponsored your St. Thomas WVWI radio show for almost two decades. You are best friends with its founder, Robbie Ferron. And you still work for them.”

“No,” she admitted, “… hardLY would be more accurate. But you still get paid, Fatty, and that’s what counts.”

“Yes,” I readily agreed. “If you sell out, you may as well cash the checks!”

“Let’s go meet Corina IV,” I suggested, “and see if we can grab an exclusive interview—before the Sports Illustrated journos helicopter-in and open their check book.”

It turns out ‘the Budget Marine boat’ (as she was constantly referred to throughout the regatta) is leased and skippered by Max  Loubser. He and his pals (Laura Bijnsdorp, Alex Nebe, Maria Merckens, Adam Robb, Kippy Gilders) are on a two year circumnavigation—just a quick circular spin around Planet Ocean.

“When I picked her up, she had a full holding tank,” he replied with a meaningful squint.

“Let’s not go there,” I said, and to quickly change the subject, shout to Alex, “I heard you are the designated guitar player.”

“Sometimes,” he said shyly while adjusting his pork-pie hat, dusting off his arm tattoos, and twirling a couple of his body-piercings.

A few nights later, we hear him playing at the fundraiser for the family of a local fisherman who’d just drowned—and Alex is amazing on guitar and vocals: think Tom Waits but with a rougher voice and cruder lyrics.

Kippy is their in-house amateur oceanographer. She is currently counting fish—and trying to set an example for the local divers.

“Lots of fish,” Kippy says, then revises her statement to, “but, perhaps, less than there should be.”

Laura is the shutterbug aboard—ever-ready to nicely record their daily adventures for their slick website at www.readysetsailnow.com.

On the starboard bow of Corina IV is a large advertising sticker that mentions Bipolar Awareness. This seems a tad odd. I ask about it—but the crew seems divided between pro and con.

One crew member says, “If we sail down to the South Pole, we will razor-blade the BI off.”

This off-the-cuff explanation seems to satisfy me when I’m in an extremely good mood—but, not so much, when I’m down in the dumps.

Carolyn and I later privately agree the crew of Corina IV perfectly reflect the crazy, cool, kooky, hip diversity of the island of St. Martin/Sint Maarten.

“I grew up with Bastiaan De Rooij and Chris Marshall of Budget Marine,” says Captain Max.

“And I parlay back with, “You mean, you knew them and hung out with them during the time span during which they were supposed to grow up!”

Which brings us to our friends from St. John, Bruce and Laura Masterson, both are old Caribbean hands and have chartered numerous boats (fully crewed or cattlemaran) out of St. John. They also had a mooring in Great Cruz Bay—when their son Connor and their daughter Marin attended Pine Peace School, as did our daughter Roma Orion.

We had many great times together aboard their graceful Spronk catamaran Jolly Mon.

They currently own a sleek monohull cruising vessel named Pacific Hywy, but recently lost their rudder while at sea on the way to Fiji. Bruce is so laidback and experienced that being rudderless (on all levels) didn’t faze him.

The most wonderful part of being on my 53rd year of ocean sailing and global cruising—is the friends I’ve made over the course of the last five decades. Especially the crazy and colorful Caribbean characters— the few at least who aren’t dead or in jail.