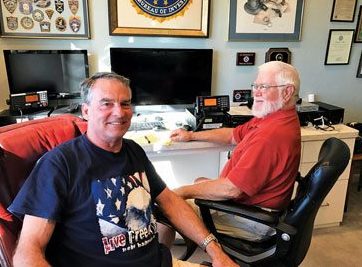 The yacht Corina IV, a Beneteau Oceanis 52, departed St.Maarten in May on a 60 country, five continent, circumnavigation of the globe. Five young friends, Laura Bijnsdorp, Kippy Gilders, Alex Nebe and Maria Merkens, who grew up together on St. Maarten, comprise the crew. The boat is skippered by Max Loubser, one of the youngest captains in the Caribbean. Together they aspire to be the first St. Maarten vessel to sail around the world.

Because circumnavigations are still quite rare – more people have scaled Mount Everest – any attempt to sail around the world captures our attention. No real sailor can say they didn’t envy Laura Dekker, the fourteen year old Dutch girl who started and finished her record-breaking circumnavigation in St. Maarten. Since Joshua Slocum made the first solo around the world trip in 1895 we have been in awe of those who take on the oceans in small boats. Such ventures led to knighthoods for Sir Francis Chichester and Sir Robin Knox-Johnston as a grateful Britain acknowledged the outstanding performance of its sailors. Similarly, America provided the world with our first reality event as we followed 16-year-old Robin Lee Graham, in his tiny 24ft sloop Dove, when he made his way around the world. Whether solo or crewed, non-stop or multi-stop, no other sailing endeavor draws equal respect.

During the voyage, the crew will take part in a study conducted by Plymouth University in England. Using a Secchi disc, they will measure sea water turbidity and transmit data and GPS information back to the university via an app. The data will be used by the university as part of a multi-year global study of plankton, without a doubt one of the most essential components of the food chain in our oceans.

As they sail west, the crew will also be donating used snorkeling gear collected in St. Maarten to the fisherman of Ile-a-Vache, Haiti.

The circumnavigation is dedicated to Environmental Protection in the Caribbean (EPIC), an organization that is doing great work particularly in protecting St. Maarten’s Simpson Bay Lagoon. The voyage is also dedicated to International Bipolar Awareness – a cause close to the heart of the owner of the vessel. His wish is for anyone dealing with a bipolar diagnosis to know the peace and inner strength that comes from sailing and the sea.

To follow Corina IV and her young crew, visit: www.readysetsailnow.com or go to their Facebook page:  Ready Set Sail