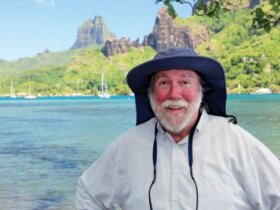 I’m dizzy from circumnavigating. That’s how fast we’re going! We’ve sailed from St. John to the Kingdom of Tonga, which is about a third of the way around the world, in five months. We slammed through the Caribbean Sea with one wild stop in the San Blas, waterskiied (almost) behind Wild Card through the Panama Canal, and then skipped across nearly the entire Pacific Ocean in the next couple of months.

You see, I like to sail. I like being offshore with my myself, my wife, my vessel, my universe and my God.

My ideal passage from St. John (USVI) to Tortola (BVI) would include a stop in Trinidad!

For me, sailing offshore is about freedom. I can’t think of any place on this planet freer than mid-ocean. Someday, perhaps, outer space will be the new frontier. Until then, I’ll head offshore… where it is completely free of cops, creeps and other objectionable forms of mammaloid life.

Deep ocean is completely devoid of all that. There is none of it. Nothing. Nada!

Vexation becomes a shore-side option, not a deep-sea constant.

Yes, it is a sailor’s life for me!

Of course, we planned on leaving the Virgins in February and thus having more time to lollygag in the Society Islands. But it didn’t happen.

“We have no money and the boat is a complete mess,” screamed my long-suffering wife Carolyn when I suggested leaving on Ground Hog’s day.

“So what?” I said. “Money is evil. Greed is bad. Financial security is… like, SO middle-class of a concept! Besides, safety is an illusion. ‘Storm’ insurance doesn’t prevent them. Don’t fall for the double-speak. Think about it: you die, your ‘health’ insurance kicks in!?! Sick, huh?”

“Don’t confuse me,” Carolyn said, slapping herself a few times in the temple to clear her ‘fatty-addled brain’ as she calls it. “…our topsides are a mess!

We haven’t spent a penny on the boat since… I don’t know when… Nixon was impeached?”

“Oh, honey,” I cooed. “That’s an external imperative… vessel appearance isn’t truly important. Don’t let other people’s yachty-snotty judgments affect you. I mean, Great Cruz Bay is filled with pristine yachts which will never go anywhere! What do you want to do: polish the bronze or live a life of rare adventure?”

There was one slight problem: people were still buying us drinks and taking us out to eat at Tage on St. John. In fact, it wasn’t until sometime in June that the dinner invitations and offers of exotic intoxicants began to dry up… and we left.

Now, the sad fact is there are hurricanes in the South Pacific, just like there are in the Caribbean. These must be reckoned with. Tahiti is, statistically, 50 times more likely to be hit by a hurricane than, say, New Orleans is.

I don’t like those odds. So I want to be out of the tropical South Pacific by early November to avoid the cyclones. Basically, there are two ways to do this: sailing down to stormy New Zealand or northward across the hot equator.

True, there are other advantages… but I forget them. (Ah, yes, there are fewer Aussies than in Australia!)

Seriously, the quickest, easiest, surest way to make an enemy of either is to just praise the other …works every time! (Warning: intentionally irritating Kiwi or Aussie sailors can be injurious to your health! If you suspect you are doing it, stop, gulp, and ‘shout’ them a drink immediately!)

The weather window to New Zealand is tiny. If you sail down before mid-October, you’re very likely to run smack-dab into a prolonged winter gale. If you wait until mid-November, a full-fledged hurricane can roll right over you.

So there is only about a month of what the Kiwi’s call ‘reasonable’ weather.

That sounds good but isn’t. By ‘reasonable weather’ Kiwi’s mean gales which don’t roll your vessel, winds which don’t detach your rig, and waves which are, generally, lower than your spreaders.

Yes, a ‘fine sailing day’ in New Zealand would blow away most of the palm trees in the Caribbean. They actually say stuff like, “…at fifty knots I hoisted the staysail, but then, when I realized it was REALLY doing to blow the following day, I dug out the trysail and set up the running backs…”

I love listening to them on the SSB radio. I was sailing alongside one Kiwi vessel who was chatting to his mate, “…bit of breeze out here,” as the display on my new American digitalized/computerized anometer was frantically blinking ‘…you don’t want to know, pal!’

I mean, the last time we sailed to New Zealand, the wind blew so hard it peeled the paint off our topsides. We had to put reef points in our ensign. The needles-bearings on our anometer overheated and caught our masthead tricolor on fire! My ears kept popping on the wave crests and I needed oxygen in the troughs… that’s how big they were!

Carolyn, of course, isn’t too keen sailing down to New Zealand. “Can’t we just hit ourselves in the head with a sledge hammer or have sex with a cactus or sum’thing,” she asked. “When do we get to the, you know, the ‘pleasure’ part of boating?”

“Do you believe in reincarnation?” I asked her with a conversational lurch.

“Okay,” I said. “Then there is hope. Who knows, maybe you’ll marry a nice guy! But right now we’re got to deal with the reality on-the-ground, so to speak. We’re here and we’re going there. Questions?”

“Okay,” I said reasonably, “I vote yes, and that means, according to the traditional rules and regs formulated by sailing ship captains down through the ages… it is 99 votes ‘for’ and only one against… which means… let me see (as I licked my fingers and visually counted mentally)… that means we go!”

“Absolutely!” I said with a ho-hum shrug, “Maritime law!”

So that is where it-is-at and where I-am-at and where we-are-at. In Tonga, getting ready to head south. I type these words while Carolyn refuels, rewaters and debarnacles Wild Card. (Occasionally I have to shout, “…not so loud, honey!” but not too often).

If we’re lucky and get there in one piece, we’ll wear our welcome out in New Zealand within five months or so and head back to Tonga/Fiji/Vanuatu area for the next winter. Then, who knows? Cares? Is keeping track?

(‘BaNG!’ comes a loud sound from the cockpit, where Carolyn is attempting to wrestle a 55 gallon drum of diesel oil from the dinghy).

“Only a few more ‘graphs,” I shout back.

The life of an ink-slinging sea gypsy isn’t an easy one. You have to stay focused. (‘…it’s crushing my foot!’) Earning your living as you go isn’t easy. (‘…get it OFF, please!’) There are countless distractions. (‘…I’m bleeding!’) The trick is to concentrate. Drill down. Zoom in.

Finally I finish my story, save my file and put away the laptop. Go to the head. Brush my teeth. And, then, skip into the cockpit for a stretch.

Carolyn is there, napping under a drum of fuel.

“…what?!?” I muse, then capitulate with, “…I thought we were going ashore for happy hour… but, hey, whatever!”

To locate Wild Card’s current position, go to http://shiptrak.org and punch in Fatty’s ham callsign of W2FAT and zoom to 50%!