How to Maintain your Underwater Photo Gear 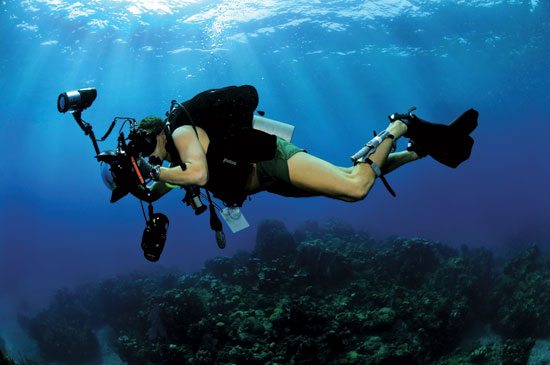 As stated in Underwater Photography Part One, many an underwater photographer gives up and sells his gear because lack of buoyancy control makes the endeavor too stressful and unrewarding.  There is, however, another reason one finds so much underwater photo gear for sale on the internet … the lack of proper care and feeding. Before we review the gear, it is critical to understand the commitment required to maintain gear in order to prevent expensive repairs or total destruction.

With each dive, disaster looms when ignorance prevails. First and foremost, underwater photo gear is not designed for combat situations. It is delicate and requires gentle hands. No matter the construction of the camera housing, it is not meant to be thrown onto a dive platform, banged and bounced around on a boat, nor dragged through rocks and sand.

I knew an alleged ‘professional’ underwater photographer whose employer paid tens of thousands of dollars for repairs and new equipment simply because the photographer never cleaned the gear, tossed it around like a rubber ball, and left it baking in the sun.

A good dive operator who understands underwater photography will have a gear area dedicated to photographers. It should be an area, hopefully a table with extended sides and a padded top, under shade, where photographers can prepare for their next dives. No one should be allowed to use the table for rummaging through gear bags, setting up tanks, or rearranging weight belts and pockets. The table should be off limits to anyone but photographers and that should be made clear before the boat leaves the dock or divers make their way from the dive shop to the beach.

The operator should have a means of rinsing and, preferably, soaking underwater housings in fresh water and that water should be changed frequently.

If there is no means of rinsing or soaking the housings, they should be wrapped in wet towels under shade. When beach diving without an operator, spend a few dollars for a couple of gallons of fresh water and take along a bucket for initial rinsing of the gear.

Never let salt water dry on camera housings and never leave the housings exposed to direct sunlight. Due to the temperature changes between depth and surface as well as heat generated by the cameras, condensation builds up inside the housings creating a very humid environment for the cameras and they soon cease to function.

Salt is corrosive and, when dried, leaves a film on lens ports and eventually corrodes hinges, locks, and buttons to the point they permanently weld themselves together. One drop of water inside a housing can render an expensive camera useless.

Underwater photo gear should be prepared and tested for the first dive of the day before the photographer boards the boat or leaves the shore. Set up the camera in a dry environment, install fresh batteries, test the camera settings, and shoot a few photos to confirm the camera is operating properly. Then, seat the camera in the housing, make sure the housing is locked correctly, and submerge the housing in a deep vessel of water and look for bubbles around the seals and buttons. Immediately remove the housing if bubbles appear, as this indicates the housing is not sealed and will definitely leak under pressure!

Once the dive day is finished, good underwater photographers head for rinse tanks or bathtubs rather than bars and food. The first priority should be giving the photo gear a long soak in fresh water. Once that is complete, the housing should be dried, the camera carefully removed to avoid any stray drips the towel missed, and all housing seals and O-rings thoroughly cleaned and inspected.

When inspecting seals and O-rings, while it may seem extreme, it is a good idea to use a magnifying glass because one tiny grain of sand, one strand of fine hair or a bit of lint, creates enough of a break in the seal to cause a catastrophic leak. After inspecting the O-rings and seals, it’s time to get out the silicone grease made for O-ring lubrication and gently apply a thin layer to the rings.

If the rings are removable, it is an excellent idea to remove them from their tracks and inspect the tracks for any sand, hair, or lint before lubricating the rings.

‘Careful’ is the key word when working with removable O-rings. Great caution should be used when removing them so as not to nick or stretch the rings. Never pull an O-ring but rather roll it through the fingers as if rolling modeling clay, then lay the O-rings back in their tracks and reseat them. Wipe out the inside of the housing with a soft, lint-free cloth and its ready once again for the camera. Check the O-rings once last time before closing the housing. Then and only then is the photographer set to head for the bar and dinner.

Becky_Bauer
Becky Bauer is a scuba instructor and award-winning journalist covering the marine environment in the Caribbean. She is a contributing photographer to NOAA.
RELATED ARTICLES
Dive