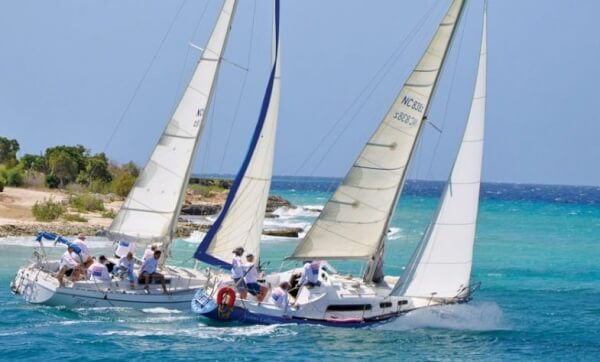 The first race of the event is characterized by a downwind start in Spanish Water on a course that takes the fleet to Fuik Bay.

The start of the second race in Fuik Bay is equally as interesting as the boats start from anchor. This means all sails are down and the crew must remain below decks until the start gun is fired. On hearing the gun, the crew sprint up the companionway to the deck, hoist sails, raise anchor, and the race is on!

This requires a certain set of skills and plenty of teamwork from the sailors as well as being a lot of fun for the spectators to watch.

As in previous years, the competition was as fierce as ever.

Having won Cruising Class for the last two years, Venus Callipyge was favored to do it again but it wasn’t to be. She was seen off by the crew of Melody, who were in top form and crossed the line first.

In the Racing Class, the anchor start in the second leg of the race played a big role in deciding the winner. The Budget Marine Merlin team was the first boat to bring aboard their anchor and should have led the charge. Unfortunately, due (reportedly) to a poorly tied knot, the jib sheet came lose and, as if that wasn’t enough, the mainsail jammed in the track halfway up the mast. Capitalizing on Budget’s misfortune the yacht Chamba II sailed away towards the first mark snatching an early lead.

After leaving Fuik Bay, the yachts hit the open sea and the downwind leg. Conditions now proved challenging and as winds increased, strong gusts and steep waves deterred many from flying their spinnakers.

However, it would take more than wind and waves to dishearten the two J-24s, Budget Marine Merlin and Chamba II. The battle that commenced on the start line heated up and both crews broke out their spinnakers. There ensued a thrilling race towards the next mark as both teams focused on steering, often surfing at high speed while avoiding the ever present threat of a damaging broach.

Both boats sailed on the edge, with no mistakes, but Budget Marine Merlin failed to expunge the faux pas made during the start and Chamba II went on to win the race and with it the regatta.

Although the newcomer Keetje, sailing with a completely novice crew, finished in last position, they had a thrilling taste of what the Budget Marine Challenge is all about.

A dinghy service provided by title sponsor Budget Marine operated to and from the beach in Fuik Bay, while the more athletic among the yacht crews – perhaps wanting to cool down – swam ashore for lunch.