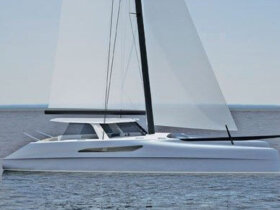 BGM founder and CEO, Miguel Guerreiro, worked at NASA before designing/patenting the technology in 2012. Passions for boating, fishing and marine environment prompted his work.

Today 40% of all metro buses in the U.S. run on NG with another 15 million vehicles around the world using NG as their primary fuel. “Boat engines must use ten times more energy [than cars] to push boats in the water. More fuel is used in boats than land vehicles, and catalytic converters are not available to reduce pollution.”

BGM’s system reduces fuel costs and pollutants by 70%, compared to ethanol-free premium, 89-octane gasoline generally used. Natural gas at 130-octane in BGM systems, matches or surpasses gasoline performance. Only super-premium gas without ethanol does better, but the cost is prohibitive.

In 2016, diesel engines must install catalytic converters to trap produced sludge, for disposal as hazardous waste. BGM’s fuel-system will reduce diesel pollutants by 90% thereby creating cost savings and extending the life of the engine. And finally, there is a tax advantage in converting to NG, increasing a boat’s value.

About 70% of all coastal residents use natural gas at home. Adding a small compressor to a home’s system could fill a trailered boat tank overnight. Or, at approximately 2,000 public natural gas stations now existing, boaters can fill their boat tanks using a special transferring nozzles.  In Raleigh, N.C., four stations offer NG at $1.66-$2 per gallon. Additionally, BGM will deploy mobile filling stations to select marinas in 2015, until marina stations become popular.

BGM’s tank size and location are determined by a boater’s normal consumption. NG should account for 80-90% of a normal trip before switching over to gasoline. With a push of a button the switch between fuels is seamless at any speed.

NG tanks are made of lightweight composite carbon fibers and plastic, with high-grade anti-corrosive stainless steel valves. BGM’s largest tank weighs 90 pounds. NG being 97% pure, it will stay in the tank and not cause any deterioration or corrosion. While NG is difficult to ignite, the tanks still use a variety of valves to ensure passenger safety in case of a fire. BGM tanks carry a 20-year warranty.

“We are working on a variety of engines and have not encountered one yet that cannot be adapted to our system,” said Guerreiro. “We have to modify and calibrate our technology to each engine type. Our goal is to make the NG hybrid-fuel system available for all the major brands of engines.” Yamaha, Mercury and Suzuki outboards, and Mercruiser inboard engines have been successfully modified. The system has proved successful for 4-stroke engines and the 2-stroke Evenrude G-2 for pontoons. Yamaha engines meet or surpass expected performance, increasing their top speed by 10%. It’s perfect for high consumption gas engines used in fishing boats, long cruisers, law enforcement, military boats, towboats, tugboats or ferryboats. Currently, Intrepid and other boat manufacturers will offer the system, including the Great Lakes Inboard Mercurizer manufacturers. Soon, BGM will expand its equipment and service centers outside the U.S. where land vehicles use natural gas.

Conversion costs are determined by: (1) Size and placement of the tank–cheapest is horizontally by the transom under a bench where space is already available, or under the helm seat. (2) Size and number of engines—adding additional components, injectors and devices. BGM works to cut the cost of a large NG tank without displacing too much deck space. Overall, it takes 1-2 days to install the entire system of tank, computer, and switches; inboard systems may take longer. Guerreiro estimates that, a 22’ Chris-Craft, V shape hull with a 250 Yamaha outboard engine, costs approximately $7-12K.

Customers begin by contacting Blue Gas Marine. “We develop the custom system, send it to the center and tell you where to take the boat to have it installed,” Guerreiro said. Facilities exist in Carolina Beach and Ocean Isle N.C. and Myrtle Beach, S.C., and soon in Florida, Georgia and Texas. The “Plug n’ Play Parts” can be put in the system in about 4 hours. However, Inboard engines may take longer to install.

Helen Aitken is a writer and photographer from eastern N.C. who loves classic wooden boats, “backyard” boat makers, coastal areas, and contributes regularly to All At Sea Southeast magazine. Visit her website at www.helenaitken.com.