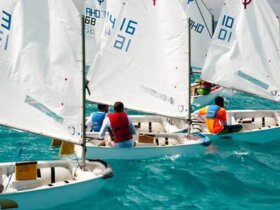 “This was a true team effort for the Shockwave crew that George Sakellaris and his captain Reggie Cole have spent two years assembling,” said Shockwave’s tactician Robbie Doyle.

Doyle said there were two different theories regarding the expected weather for the race. “One was that it would be light at the start but very solid the rest of the way to Jamaica,” said Doyle. “Knowing Shockwave’s capabilities, we definitely were thinking that beating the record set by Titan was a possibility. The other forecast was for a light and variable breeze to carry on for the first 12 hours of the race, and that proved to be the case. Nevertheless, we were able to recover from that and still had a good shot at the record but fell 58 minutes short.”

Doyle added that a conservative start on starboard tack at the pin end allowed them some southerly distance before jumping into the northerly heading Gulf Stream. They sailed until they ran out of counter current and jibed to cross the stream to leeward of all but IceFire, the well regarded TP 52 entered by the U.S. Merchant Marine Academy Sailing Foundation (USMMASF).

It was one long match race for IceFire and another TP 52, Bryon Ehrhart’s Lucky, but IceFire prevailed, beating Lucky by a little over two hours and taking second place on corrected time in IRC Division.

“We were close to Lucky the entire time and it was great sailing because we were perfectly matched,” said IceFire crew member Jesse Fielding, adding that his team, headed by Ralf Steiz president of the USMMASF, was promoting All American Ocean Racing, a new program that prepares sailors, age 30 and under, for offshore racing.

“Events such as this weave richness and fullness into the fabric of our lives,” said Renegade crew member Dudley Baringer. “Recollections of these times will put a smile on this old man’s face for many years to come, God willing.”

After this year’s finish, sailors were treated to a week of fun with cocktail parties every night, steel bands, limbo dancing and other memorable displays and competitions, ending with a dinner, dance and prize giving ceremony on Friday, February 15.