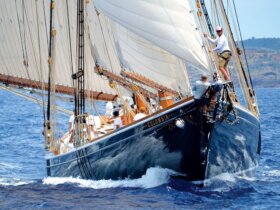 Optimist sailors proved the bulk of the fleet, and it was St. Thomas’ Ian Barrows who sailed consistently in the ten-race event, with excellent starts and no protests or penalties, to win the overall trophy. Barrows narrowly edged his lead over Puerto Rico’s Raul Rios who in October won the Peruvian Optimist National Championships and like Barrows, has his sights set on sailing in the Optimist Worlds in Uruguay in January 2007.

Remarkably, three Virgin Islands’ sailors – Barrows (first), St. Croix’s Billy Gibbons (fourth) and St. Thomas’ Nikki Barnes (fifth) – placed in the top five, against a powerhouse of sailors especially from Puerto Rico. A good measure of this success is due to Argentinean coach, Agustin “Argy” Resano, who trains the team five days a week, including 8-hour stints on Saturdays and Sundays, and has done so since last spring.

“The Optimist competition was awesome with many boats changing places throughout the entire event,” says Ivan Diaz, vice president of the Virgin Islands Sailing Association (VISA), who attended the event with his Opti-sailing daughter, Challis. “The starts were very aggressive with multiple OCS (over early’s). The use of the I flag by the race committee calmed down the Opti fleet a bit.”

Winds were uncharacteristically light, 8 to 12 knots, out of the east-southeast. Sunny skies and a light chop on the seas made for ideal racing conditions.

The event was part of the annual Discover the Caribbean Series, a trio of sailboat regattas for big boats as well as dinghies, which takes place along the southern coast of Puerto Rico during three successive weekends in October and November.