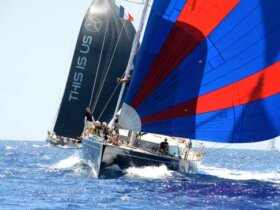 SY This is Us Wins the St. Barth Bucket

Sailors from throughout the northern Caribbean converged at the Palmas del Mar Yacht Club and Marina in Humacao March 19 to 21 for the Puerto Rico Heineken International Regatta and Puerto Rico International Dinghy Regatta. "The attendance has exceeded our expectations for an international regatta in Palmas," said regatta director Angel Ayala.

Winds gusting to near 20 knots on the last day – which followed two days of sunny skies, moderate chop and winds that rarely dipped below 10 knots – made a fitting finale to the regatta and allowed several boats to shore up and solidify class wins.

The St. Croix based J/100, Bad Girl, finished with a string of first place finishes over the three days of racing, only conceding that position a few times to second place finisher, St. Maarten's Frits Bus on his Melges 24, Coors Light, and third place, Soca, a Henderson 30 skippered by Puerto Rico's Luis Juarbe.

In Spinnaker Racing B, John Foster from St. Thomas, aboard his Kirby 25, The Good, The Bad and The Ugly, maintained his lead throughout the regatta, racking up nothing but bullets on the first and last day.

"The upwind sea was hard to read. There were big waves and a lot of swell. Downwind it worked to our advantage as we glided off the waves. That's when we pumped everything we had," said Foster. However, fellow St. Thomian, Paul Davis, helming his J/27, Magnificent 7, wasn't far behind and in fact won two of 11 races in the class. Puerto Rico's Kike Gonzalez, aboard his J/80, Otrakosa, rounded out third place in the class.

The Performance Cruising class saw Puerto Rico's Carlos Camacho, on his J/105, Abracadabra, finish in first with nothing lower than a first place. "Light winds are tough, but today we saw gusts to 18 knots and they ran us on windward-leeward courses, which is what we like," said Camacho.

Finally, this regatta saw competition in two one-design classes. In the IC-24 Class, the BVI's LIME, sailed by Colin Rathbun, ended with nothing lower than a first place finish. An outstanding performance by Puerto Rico's Sal Pa Fuera, sailed by Willie Olivo, landed the boat in second, while Puerto Rico's Artimana, driven by Rafael Martinez, rounded out third.

The J/24 class was one of the most competitive of the regatta. Puerto Rico's Fraito Lugo, who will compete for his island in this summer's Central American and Caribbean Games (CAC), won. Two boats from the Dominican Republic, also practicing for the CAC games, entered the regatta and one, Colibri driven by Eduardo Ortiz, took second in class. Gilberto Rivera from Puerto Rico finished third aboard his Urayo. "It was great to have the two Dominican teams sail with us," said Orion's Lugo.

Kite boarding was a new addition to this year's event. Alex Soto and Robinson Hilario, two professional freestyle riders from Cabarete, Dominican Republic, joined the near 30-competitor fleet from Puerto Rico. The kite boarders put on an exhibition in front of the host Palmas del Mar Yacht Club on the final day of competition that whetted everyone's appetite to see more of this sport. For complete results, visit result.vg