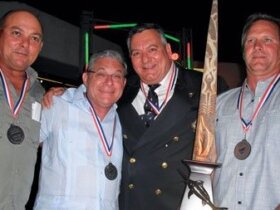 “The fishing was fun and Bitter End was the perfect host,” says Johnston. “It was my first time here, and I will surely return many times.”

Yet it was George Lorton’s Gulfport, Florida-based Therapy that released three blue marlin first to earn top slot on the leader board after the first day of fishing.

“The conditions were ideal, with 10 to 15 knots of wind and calm seas,” says Therapy’s captain, Ray Walters. “We saw five blue marlin and ended up catching three.  It was a great day for us.”

Come day two, Therapy and Blue Bird didn’t release any more marlin, but they did keep their first and second slot leads, respectively, based on time. Meanwhile, Gulf Rascal and Blue Bird added a release to give the top four tournament boats three marlin releases apiece.

In the end Ay Caramba added a fourth release to take Top Boat honors and pocket such prizes such as a Rolex timepiece, a World Billfish Series (WBS) invitation to fish the WBS World Championship in Costa Rica later this year, and free entry into the San Juan International Billfish Tournament (IBT) from August 11 to 17 out of Club Nautico de San Juan.

Like last year, the A.H. Riise BVI Billfish Tournament and the IBT once again joined forces to promote their prospective events.

IBT tournament director Gonzalo M. Ferrer says, “We feel that combining forces with our friends from the BVI can only enhance both our tournaments. Our people love the BVI and spend a lot of time there in July. This offers them the chance to combine great fishing with quality family time at the Bitter End.”

The two tournaments also announced a new trophy that will be awarded to the top angler based on combined scores in both the A.H. Riise BVI and IBT. The keeper trophy will be a Waterford Crystal bowl set on a wood base and will be on display at Club Nautico in Puerto Rico and various locations in the BVI.

“This new trophy represents another example of our cooperation with our fellow anglers from Puerto Rico,” says Wheatley. “Club Nautico is one of the finest fishing and boating clubs in the world and is home to over 100 fishing machines. We look forward to many years of working together.”

Several new events were introduced to this year’s tournament including an evening cocktail competition on the docks for crews.  For their unique creation of Beetlejuice, the crew of Big Oh received a complimentary night’s stay courtesy of the Bitter End Yacht Club.

Following the awards, Sebastiano Paiewonsky-Cassinelli of A.H. Riise presented a check for $40,000 to Mr. Ralph O’Neal for BVI charities. This totals nearly $100,000 the tournament has contributed in donations to local charities in its two years.