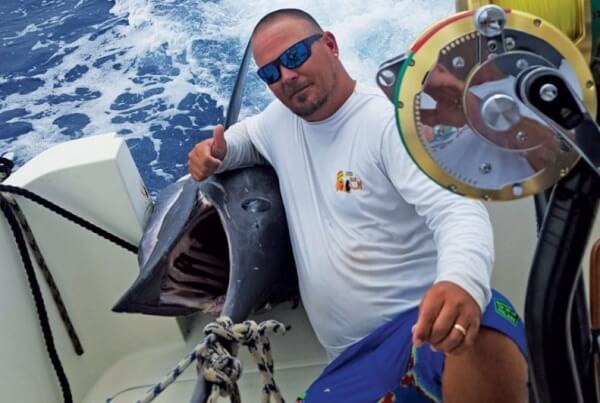 The Caribbean can take partial credit for championing the 32nd annual Blue Marlin World Cup, even though the winning fish – a 983lb blue marlin – was caught across the Atlantic in the waters off Madeira, that’s because a key member of the team aboard the 33ft Rodman, Blue Makaira, who helped UK angler Mark Rideout make this incredible catch, is from Antigua. Sean Williams, known better as Antigua Sean, was the mate that gaffed the monster marlin.

“Antigua is home and I started fishing there at an early age,” says Williams, who has fished all over the world. “The boat owner called and the decision to go on my part was easy. The fish bit at around 10:30 in the morning and we fought it for about two and a half hours. It felt like it had been hooked before because every time we made a move it would counter it.

It was literally like a game of chess, us and the fish, waiting for the other side to make a mistake. I had the leader in hand at least nine times before the fight came to an end. We knew she was big but didn’t want to make any calls on her weight till we got to the scales. Once there, her measurements were 144-inches in length and 66-inches in girth with a weight of nearly 1,000 pounds.”

This massive fish was the fourth-largest blue marlin in the World Cup’s history.

A record 162 teams participated in this one-day winner-take-all tournament that takes place annually on July 4th. Anglers can fish anywhere in the world and did during this date, including Papua New Guinea, Cameroon, Mozambique, Bermuda, the Bahamas and U.S. Virgin Islands. It’s the angler that reels in the largest blue marlin during that 24-hour time span that wins. The Caribbean directly scored the win in 1988 when Dominican Republic angler Enrique Ricart fishing aboard the Mar-Y-Cristy caught a 499lb blue marlin off St. Thomas. www.bluemarlinworldcup.com