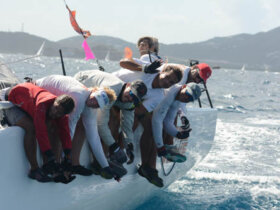 Work hard. Keep trying. Learn from mistakes. These are some
of the principals that guide 14-year-old Puerto Rican junior sailor David
Alfonso. “I’ve learned from sailing that if I work hard enough and try heard
enough, I can get what I want.”

Alfonso comes from
a sailing family. Dad Roberto, a prominent San Juan dermatologist who
immigrated to Puerto Rico from Cuba in 1965, immediately pursued his passion on
the seas aboard a Ranger 33 and then C&C 40. “I sailed all the time, in the
Rolex and BVI and was a past commodore of Club Nautico de Puerto Rico,” says
the elder Alfonso. David’s older brother, Roberto Jr., actively sailed Snipes
and in 1982 was the youngest member of the Puerto Rican Olympic Team.

David was just a babe in his mother’s arms
when his father bought and commissioned a new Taswell 49 at the 1991 Ft.
Lauderdale Boat Show. Aboard this boat, the family cruised as well as raced.
“We’d go over to Francis Bay in St. John or the BVI every Easter and summer for
one to two weeks,” says Dr. Alfonso.

Within a few short
years, David began captaining the yacht’s dinghy. “Some of my first memories
were racing around an anchorage with one of my father’s friends.”

It wasn’t until
the summer of 2001 that Dr. Alfonso enrolled his son in a short summer sailing
program at Club Nautico de San Juan under the direction of Jose Gilberto “Yo
Yo” Berrios. “My first thought,” says David, “was that there was so much to
learn. It was a whole new world. Everyone else was so good. I wanted to go out
and get a ride right away.”

Dr. Alfonso
learned of the Scotiabank Caribbean International Optimist Regatta in St.
Thomas just a week before the event took place. “I decided to take David at the
last minute,” he says.

Faced with an
older charter boat with a wobbly rudder and loose dagger board, David
nonetheless won the Green Beginner Fleet with a spectacular sailing
performance. “I made lots of friends. That’s one of the things I like best
about sailing. And, of course I wanted to win again. If I hadn’t have gone to
that regatta I probably wouldn’t have got into sailing.”

David did get into
sailing, and in a big way. The next summer he was one of five junior sailors
from Puerto Rico to qualify for the Optimist World in Corpus Christi, Texas.
“It was a big event, kids from all over the world. I finished third out of the
kids from Puerto Rico, mid-fleet overall and did get a third overall in one
race.”

That winter, the
Alfonsos headed to Miami, Florida, for the Orange Bowl Regatta. “There were
lots of American kids, so it was much more familiar,” he says. “The second year
I went I won 4th place in the Blue Fleet.”

Over the last
three years, David has competed and won several local regattas, raced in
regional events, continued to sail at the Orange Bowl and attended Optimist
Worlds in Spain and Ecuador.” In October, 2004, he was named Top Optimist
sailor in Puerto Rico’s Discover the Caribbean Series.

When he’s not
sailing, David enjoys playing tennis, soccer and excelling at academics at the
St. John School in San Juan. The soon-to-be 9th grader has won a
Presidential Award for academics. “I’d like to study architecture or medicine
later,” he says.

As for sailing,
David will age out of Optimists next September and looks next to Laser 4.7s and
Snipes. “My big brother wants me to sail Snipes with him. There’s a new group
in Puerto Rico and so far there’s already six boats.”

St. Thomas’ Pat
Bailey, chief judge for this year’s Scotiabank Caribbean International Optimist
Regatta, presented David with a special prize to mark his five years of
achievement at the event – including first overall in 2004. Bailey summed up
Alfonso’s sailing potential best when he said: “The Optimist Class may be
losing David, but we’ve now unleashed him into the rest of the sailing world.”