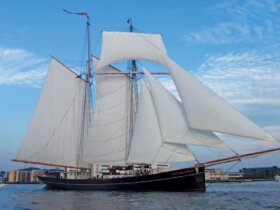 Amazing people, with stories to match,
filled St Lucia’s
bars, restaurants and, of course, the marina over the Christmas period, as
they’ve done for the past 16 years — and hopefully the next.

Take the
crew of the 65ft Spirit of Juno,
crewed by ex-service personnel from the British Limbless Ex Service Men’s
Association (BLESMA). The charity organization, formed after WWI, takes care of
the health and welfare of its members.

First
Mate Paul Burns, one of the crew of 15 (one female) who made ARC history when
they docked at Rodney Bay Marina, was full of praise for BLESMA.

Burns,
along with the rest of his crew, sustained injuries in a plethora of global
conflicts. He lost a leg in Northern
Ireland after an IRA bombing.

But the crew don’t feel handicapped, all are proficient
sailors and always looking for the next challenge.

Three of
the crew previously took part in the Global Challenge race.

However,
experience in the ARC did count, with weather conditions less than ideal for
the majority of the crossing.

“We
were hoping the weather would be at least fair,” said Burns, “but
we experienced a bit of a hurricane and the winds were gusting quite high.
Nevertheless, it was a fantastic experience and everyone seemed to enjoy it.
They were whooping it up and hollering.”

But it
wasn’t all plain sailing, especially when they ran out of tea and sugar.
Serious stuff! After all, Britain
based an empire on this kind of thing!

Sergeant
Wayne Harrod, the only crew member still on active
duty with a battalion unit in England,
described the crew as “a bunch of old soldiers who need a bit more
discipline.”

Then
there was the story of the evacuation of The
Minnow’s skipper. Bob had unfortunately cut and burnt his finger
after catching his hand in a block.

MRCC
Martinique were contacted and duly arranged for a passing freighter to evacuate
Bob for some urgent medical attention. Once alongside, the freighter lowered a
net and Bob got in and was winched aboard. A helicopter then united Bob and
hospital.

A missing
skipper is one thing, but a missing musician, is well, more or less the same
thing in this case. Bob was also part of the band aboard
The Minnow (two tubas and a piano shared
The Minnow with the crew) and so a tuba player short and three days
until landfall they rehearsed the best they could.

Glen
Miller’s “In the Mood” could have been retitled
“In a Mood” as the duo stuck to the task of entertaining the
expectant throngs of Rodney Bay Marina—Bob was sorely missed!

The first
40.7ft Beneteau Lazy Dawn was far
from lazy as they flew their Parasailor in 30 Knots of wind about a couple of
days from reaching St Lucia. Deciding to snuff the sails as the wind increased
they lost a sheet over the side. Murphy’s law
did the rest when it lassoed the propeller.

With no
means of motion, Skipper Chris donned a small pony dive tank to free the
propeller. No easy task with the rolling ocean swell, the risk of the boat
slamming down on him was always a danger.

With
Murphy’s Law again in evidence Chris’ air ran out, much to the
concern of the crew and in particular his wife. Holding his breath and slashing
for all he was worth Chris set about the entangled sheet—eventually
dragging himself back on board and away from Murphy’s Law!

Concerned
that this wayward sheet had affected their performance, the crew were happy to
discover that Lazy Dawn and the prop
were all going forward together.

The
all-lady crew of the Odienne
surprised everyone at their stealthy finish. The Turkish crew—along with
a couple of male stowaways—crossed the finishing line without radio
contact and if it hadn’t have been for some keen eyes, who witnessed them
circling around the finishing line, we might still be in the dark!

Odienne finally
made contact and said “oh yes, we crossed the line 20 minutes ago!”

Spirit of Venus saw stars when entering
Rodney Bay Marina. Their engine wasn’t behaving and, after a test, they
decided to chance it. Happy at reaching land, excitement took hold and finding
out there’s no reverse, when contact is imminent, isn’t always the
best way to dock but probably the quickest!

Probably
the best dressed crew was the Om Shanti contingent. They crossed the
Rodney Bay
finishing line in full evening dress! This was
Om Shanti’s
skipper, John Pearce, 27th Atlantic crossing
and described it as “the most exciting, frustrating and demanding I have
ever completed.”

The crew
on board the 43ft Annamin
recounted how they came off second to a brief liaison with a large sperm whale
in the mid-Atlantic. “We don’t know if it was an aggressive move by
the whale, probably not, however a very large sperm whale as big as the boat,
hit us broadside and then dived under the boat, catching itself on the prop
shaft.” A bent propeller shaft meant that the yacht had to be towed into
Rodney Bay Marina Saturday—now that’s a whale of a story!