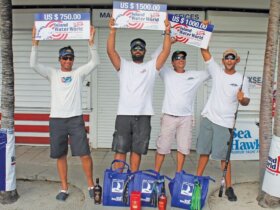 Over the weekend of 16/17 June, St Maarten held its sixth Caribbean One Design Keelboat Regatta, sponsored by North Sails. In a relatively short period, this end-of-season championship has been bookmarked by top sailors from across the region as the best venue to race their rivals on equal terms; and 2007 was no exception. Teams from St Thomas, St Barts, St Croix, BVI and Antigua made the trip, as well as crews from as far as St Lucia, Grenada and Trinidad. Waiting for them were six pre-qualified teams from St Maarten and St Martin.

Conditions were feisty – breezy but with repeated gusts off the hills and some insane wind shifts. Whereas the benign, consistent conditions of previous tournaments were a test of a skipper’s concentration and patience, this regatta would reward those crews who could think on the hoof, react together and make the right calls. Watching them would be spectators on the floating Explorer, which served as the regatta on-the-water HQ.

At the end of day one, the 18 teams were divided into Gold and Silver fleets, for six 9-boat races on the Jeanneau Sunfasts. Race One in Gold went to St Thomas’s Chris Rosenberg, last year’s winner, who gave up the helm this time round. Hot on his transom was Emma Paull from the BVI, who has won the Women’s Keelboat Championships three times on the same boats. Race Two introduced a new contending pair, with a bullet for St Maarten’s Luc Knol and second for Robbie Ferron. By Race three, Rosenberg was recording a 7th place, Emma Paull 9th, Luc Knol 8th, and yet again there were two new names on the podium: St Croix’s Chris Stanton in 1st and Trinidad’s Paul Amon in 2nd.

Three races later, however, and the form book had been returned. Rosenberg showed his tactical superiority with three straight bullets, to give an awesome 9-point final lead over the second place Carib Team, skippered by Frits Bus, who didn’t win a race but was always challenging. Third place went to Chris Stanton.

The North Sails Regatta has been won by a sailor from the USVI three times out of six (Rosenberg twice, John Holmberg in 2004), with Robbie Hirst from the BVI also winning twice. One characteristic of this One Design regatta is how dominance at the top conceals enormous competition in the chasing pack. While four bullets in six races and two successive titles would suggest that Rosenberg has mastered this regatta, in the same way that Emma Paull has made the Women’s Regatta her own, there is far more going on beneath the surface.

A win for a home sailor is tantalizingly imminent, as is the prospect of a down-island newcomer flying in to steal the show. In 2004, the North Sails regatta famously went down to the last wind shift, with four boats in contention at the race’s start. The success of the One Design Keelboat Regatta is that the significance of each decision and each race remains just as prominent.

Nick Marshall is an English journalist living on St. Maarten who was consultant editor of All At Sea from 2003 to 2005.