The Bahamas & Caribbean are a hotbed of history, culture, and celebrity. Museums honoring all of these are fun to explore when ashore. Here is a sampling of six to not miss:

Try on costumes, learn how to use cowbells and goat-skin drums, and participate in an authentic Junkanoo ‘Rush’ at this museum on Horseshoe Drive in Nassau, Bahamas. “Our amazing little museum represents a glimpse of our festive and colorful Bahamian culture.  Here, our guests can view the many awesome and intricately crafted costumes and photographs that tell the story of the origin and past parades. Our vibrant exhibits capture the art of Junkanoo costuming and music,” says Marcia Smith, operations director. An add-on to the regular tour teaches visitors how to create their own Junkanoo souvenir hat or mask. junkanoo-world.business.site/

Plan NOW for Junkanoo in the Bahamas

The history and culture of the Turks & Caicos Islands come alive in two locations of this national museum. On Front Street in Grand Turk, the museum is housed in a two-story historic building, Guinep House. Inside one of the rarest items is a duho, a wood-built ceremonial seat used by the chief of the indigenous people, the Lucayans. Other must-sees are artifacts from the 1513-sunk Molasses Reef Wreck, the oldest European shipwreck salvaged in the Western Hemisphere, and the historic salt industry. “Grand Turk is very small but has a big history, the museum surprises most visitors with the number of exhibits, detailed information, and overall experience,” says Lisa Talbot, director. In Providenciales, in the Village at Grace Bay, the slave ship Trouvadore and Sapodilla Hill Rock Carvings are some of the exhibits featured in the Heritage House & Garden, a historically correct recreation of a typical 1800’s Caicos-style house. www.tcmuseum.org 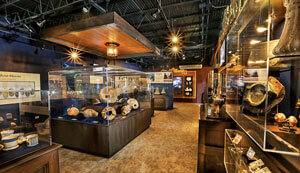 Located across from the Havensight Cruise Ship dock in St. Thomas, U.S. Virgin Islands, this museum has a whimsical Pirates of the Caribbean feel – including a Johnny Depp lookalike on staff but is home to some seriously historic artifacts and super-fun interactive exhibits. “One of the rarest items the museum has is an Astrolabe, which is one of only 108 that are known to exist. This was a navigational tool dating back a few centuries B.C. and used to calculate your position using the stars. Our astrolabe was recovered from the wreck of the Spanish merchant ship, Rosario, in the Gulf of Mexico some 1,300 feet below the surface. She sank during a storm in 1622 along with other Spanish ships such as the Atocha,” says Scott Bunn, general manager. Some of the interactive exhibits immerse visitors in the deep-ocean exploration technology used to recover sunken treasures.

It’s hard to choose one, so be sure to visit both museums when in Nevis. Both the Museum of Nevis History and Alexander Hamilton House Museum are located on the waterfront in Charlestown. Inside the first, see an exhibition that spans from the island’s original Amerindian inhabitants to contemporary Nevisians and famous expats such as the late American actress Cicely Tyson. The Hamilton House talks about the Nevis-born man who became a U.S. Founding Father. A third museum, the Museum of Nevis Maritime History will open in late 2023. “The former Nelson Museum, next to Government House on the outskirts of Charlestown, is being transformed into a museum that will celebrate Nevis’ maritime history, boat building and fisheries traditions, shipwrecks, as well as the fascinating story of pirates in Nevis,” says Lorna Glover Abungu, museum and heritage consultant. www.nevisheritage.org

See Bob Marley, Brian Lara, the Mighty Sparrow, Marcus Garvey, Fidel Castro, and Sydney Poitier, to name a few, at this recent museum housed on the first floor of the Norman Center, on Broad Street in Bridgetown, Barbados. “The Wax Museum seeks to be the primary repository of wax depictions of iconic Caribbean figures. There are already fifty depictions in the Museum from Venezuela, Bahamas, Guyana, Trinidad and Tobago, Haiti, Barbados, St. Vincent, Jamaica, Cuba, St. Kitts, and Nevis, St Lucia, and Mexico,” says Art Edwards, director. “It is the only museum in the world that focuses on wax depictions of Caribbean Icons.” www.facebook.com/caribbeanwaxmuseum/

The last thing you might expect to see off Phillipsburg, St. Maarten is Yoda, the fictional Jedi Master of the Star Wars film fame. Yet, there he is in a movie museum founded by make-up artist and creature design artist, Nick Maley, who was a key contributor to Yoda’s creation. There’s everything from Darth Vader to horror film favorite Boris Karloff and Michael Jackson’s Thriller. There are also pieces on exhibit from movies like Hellraiser, Alien, and The Terminator, as well as life-size casts of Hollywood stars from Harrison Ford to Sir Anthony Hopkins. Maley, originally from London, lived and served as Commodore of the Jolly Harbour Yacht Club in Antigua before moving to St. Maarten with his wife in 2007. netdwellers.com/mo/ygme/index.html, www.facebook.com/ThatYodaGuy/