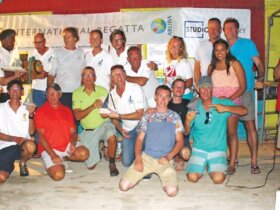 For the third consecutive year, the Club Nautique Le Neptune du Lamentin organized the Carnival Regatta. With 33 boats registered from Martinique, Barbados, Trinidad and Guadeloupe, this test showed the importance it is gradually taking in the Caribbean, with an ambitious program that linked nautical and carnivalesque activities. There were exciting evenings with a parade at Anses d’Arlet on Saturday evening, a DJ night on Sunday, and performances from the Ponton du Bakoua on Friday and Monday. It should be remembered that on the Monday, as Carnival requires, the participants were in disguise.

The winning boat in the Racing Class was the Melges 24 ‘Caraibes Greement’, which was small but immensely competent in the regatta. Owner Philippe Leconte described the history of the boat with enthusiasm: “I bought the boat second hand 11 years ago, and got it back into shape with a small budget, including second-hand sails.” Leconte arrived in Martinique after a mini-transatlantic, and set up the chandlery ‘Caraibe Greement’. The Melges 24 is almost part of the business, since the crew at regattas is made up of Leconte and his employees (even though some have never sailed); this allows him to build a crew and develop certain qualities and skills.

During the days at the Carnival Regatta, competitors encountered large showers with strong winds and abundant rain, making sailing difficult and very technical. Luckily, Monday was calmer with a return of the sunshine. After their domination on Saturday, the Martinique crews hardly left any chance to their opponents. If Philippe Leconte and Jean Christian Socias on Chapla (Edel 5) were untouchable in wrapping up the leading places, the victory of Nicolas Gillet on Clipper Ship (Surprise) was less easy, since his runner up, Gerard Corlay on GFA Caraibes, battled until the very end to get onto the podium, but despite his victory in the last race, had to be content with second spot.

Behind the winners in this third edition, the competition was no less hot, which allowed for some scintillating legs. On Monday, while the boats made their final adjustments to cross the finish line and dock at the Ponton du Bakoua, the sight of the multicolored spinnakers was a beautiful sight.

Worthy of note in this edition was the yacht Kamikaz and its youthful crew (under 20 yrs), who were still sailing with the same re-stitched spinnaker from last year!

This show, however, organized by Yves-Michel Daunar, would not be what it is without the three days of festival that accompany it. The challenge is to reunite carnival and sport, which the organizers manage to do perfectly. The procession at Anses d’Arlet on Saturday nights is a success, with the inhabitants of Arlet and crews joining together to jump up in the streets. The Carnival Regatta perfectly fulfilled its role and was respected until the very end. On the second evening, the DJ at the Ponton brought together some 300 people in a festive atmosphere. Many will remember these evenings for a long time, even if the next day the departures were a little too early for their taste. Everything wrapped up with an awards ceremony in the same spirit.

All the ingredients were thus brought together for the 4th edition, which will hope for an even greater Caribbean participation. “I would like to be able to propose to outside crews the discovery of the richness of our waters,” admits Yves-Michel Daunar, who wants to get greater numbers out on the water, particularly in disguise.

Next year’s regatta will take place the 21-23 February 2009. Come next year to enjoy one of the most joyful regattas of the Caribbean. The door is always open to all nationalities.