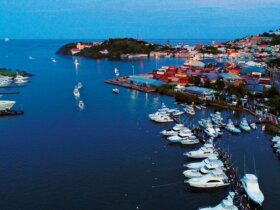 In 2017, the last year the tournament was held due to hurricane aftermath, 67 anglers aboard 17 boats reeled in a total weight of 544.64-pounds of dolphin. St. Thomas’ Angela Berry earned Top Angler by catching a 34.06-pound dolphin from aboard the 45-foot Wilbur, Family Ties. The Best Boat prize went to Emanuel, a 37-foot Calypso with Captain Alvin Turbe at the helm, with 184.49-pounds of dolphin.

Register for the tournament at the Virgin Islands Game Fishing Club in Red Hook on Friday April 12 starting at 6:30 p.m. The fee is $300 for member boats with $50 for an extra rod and $350 for non-members with $60 for an extra rod. The Captain’s Meeting will follow registration.

Fishing begins with lines in the water at 6 a.m. on April 14. All boats must be back at American Yacht Harbor’s “P” dock by 4 p.m. to weigh-in. The Awards Ceremony will take place on April 15 at the Virgin Islands Game Fishing Club, with doors open at 6:30 p.m.

The Virgin Islands Game Fishing Club in a 501c3 non-profit organization. Proceeds from the Dolphin Derby will benefit local charities.