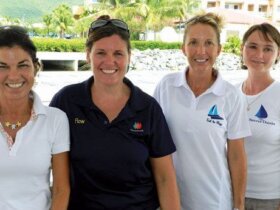 Open land punctuated by a mountain of dirt now replaces the sight of crumbling pink-painted buildings and derelict docks at the site of the new Yacht Haven Grande marina complex, located on the far eastern shore of St. Thomas’ Charlotte Amalie harbor.

Elie Finegold, vice president of the New York-based Island Capital Group, the parent company of Yacht Haven USVI, LLC and owner of the Yacht Haven Grande complex, says: “Getting the buildings down was our first priority. With that done, we’ve now turned the corner and look forward to construction of the buildings and docks, and adding life to the area.”

Come this spring and summer, Finegold adds: “Expect to see a lot of machinery and activity. We’ll first work towards soil improvements to strengthen the landfill for the foundation of the buildings to be more resistant to wind, waves and earthquakes. You should begin to see buildings rising out of the ground by mid-year and new docks by summertime or early fall.”

The docks, Finegold says, are being pre-fabricated in Trinidad using the latest construction technology and will be set on concrete fixed piers. “The main docks will be 18-feet wide with finger piers between 10- and 18-feet wide.”

There will be 30 dedicated marina slips, one capable of docking a 400-foot mega yacht, with 6000 linear feet of slip space overall in Phase I of the development. This phase, projected to be complete by the end of 2005/beginning of 2006, will also include 83,000 square feet of marine-oriented retail space, 31,000 square feet of office space, 12 luxury condominiums, 400 parking spaces, and a public access dinghy dock.

“Our first priority is to open with a full service marina. We recognize the severe lack of mega yacht space,” Finegold says, adding: “Its relatively easy to build a mega yacht, but its the marinas that have been unable to catch up.”

That lack of space for 80-plus-foot power yachts will only become tighter in the Virgin Islands and Caribbean as a whole over the next few years. According to ShowBoats International’s 2005 Global Order Book, the market for luxury yachts has tripled since 1997. This year’s 144-yacht increase in orders over 2004 is the same size as the entire global yacht market of 1992. This represents 14 miles of yachts currently under construction and signifies an estimated $1.22 billion jump in the value of the industry’s new yacht construction.

A new yacht club facility will be part of the development’s Phase II construction.

“Its premature to say when Phase II will start, other than to say we expect it will be within a year of Phase I being completed. We want to be able to learn and process information from the construction of Phase I and incorporate it into Phase II. However, we will work to have the heavy construction complete as early as possible, so there will be no interruption of service in the marina,” Finegold says.

The new yacht club will be positioned on the ground floor of a hexagonal-shaped building constructed at the end of a 230-foot pier. A fine dining restaurant will sit atop the complex where diners will be able to have a bird’s eye view of the harbor.

“The yacht club will be an amenity for members and guests of members,” Finegold says. “It will be a place where they can have a meal, relax and enjoy athletic facilities. It will also be a central place that can serve as control central for major regattas and world class sailing events.”

Finegold concludes: “We’re tremendously excited with the progress to date and expect work to continue along the timeline projected.”