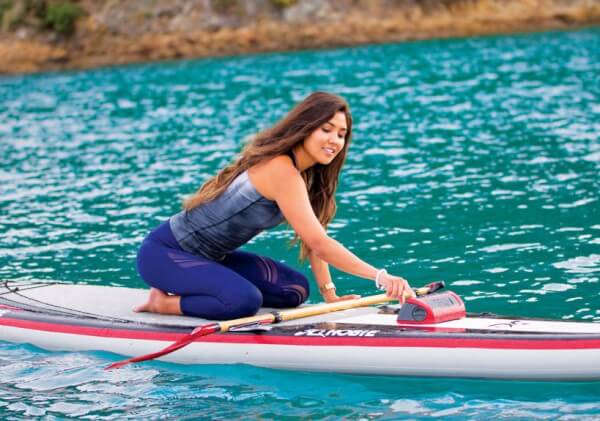 Trade shows and boat shows are always good venues to see what is new and exciting in the world of water sports and boating. Surf Expo, the watersports and beach lifestyle tradeshow held in Orlando, is no exception. Manufacturers from stand up paddle boarding, surfing, paddle sports, freediving, kiteboarding, wake sports and others all converge on the land of the mouse to show off their latest and greatest wares. The innovation at these shows is always impressive. There isn’t room in this article for all the cool new products at the show but below are just a couple of what were on display.

Paddle Tunes
Fusion Entertainment is well known for its high quality marine audio products amongst boaters but it’s about to become a recognized name in paddle sports thanks to its new StereoActive portable watersport stereo. This self-contained compact music box has been developed from the ground up for the paddle sports enthusiast. The lithium battery powered unit can stream Bluetooth, tune into AM and FM as well as weather bands (in the US) or play MP3 music from a USB flash drive for over 20 hours on a single charge. A recharge only takes three hours. Its two custom designed 2.5 inch speakers produce a remarkably good sound after passing though a specially designed sound chamber and amplifier, giving it sound that audiophiles will respect and enjoy.

Of course sound quality is important but so is the StereoActive’s ability to hold up in the very wet paddling environment in which it was designed to be used. With its polycarbonate body weighing just 1.3Kg it has a IPx7 waterproof rating and floats if dropped in the water. If you wish to attach it to your SUP, paddle craft or boat it comes with a Fusion Puck. This puck can be attached to your watercraft via screws, adhesive or double-sided tape. Just place the StereoActive on it and press the locking lever in place. It is now safely mounted and will not drift off should you capsize or hit any waves. There is even an optional Ram Mounts adapter that will allow you to take advantage of any Ram system mounts you may already have. Control of the stereo can be accomplished by the tactile controls on the top of the unit. When depressed they give audible clues as to their function, such as volume, track and source. They are designed to be used with your fingers or the end of your paddle. The fusion engineers put a lot of time and thought into this stereo and even designed an area on the stereo for mounting an action camera. If mounted here you can unclip from the Fusion Puck and take all your valuables with you in one handy package. 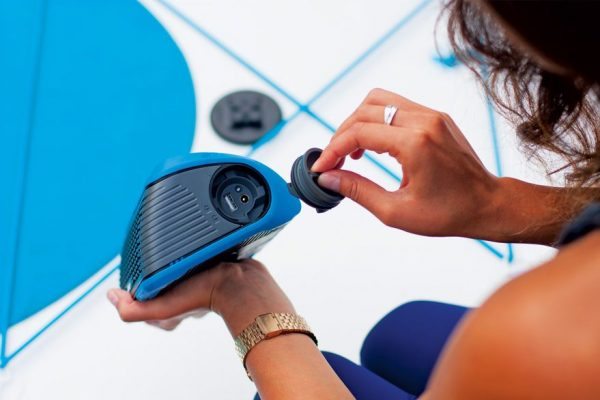 Another option Fusion developed for this new stereo takes care of the issue of keeping your Bluetooth streaming smart device safe, dry and in a spot that allows for easy streaming. Its new ActiveSafe will lock into the bottom of the StereoActive unit and in turn latch onto the Active Puck. In it you can place your phone, keys, money and credit cards, keeping them all safe and dry.

These stereos and safes are available in different colors. No matter what is your preference of color or watersport you can be out on the water jamming out in style. fusionenetertainment.com

Confused Sharks
Shark Mitigation Systems Ltd., is a Perth, Australia, based company that claims it has developed a non-evasive way to protect surfers and watermen from shark attack. Craig Anderson (the company’s founder along with co-founder Hamish Jolly) explained to me that they developed, in collaboration with the Ocean’s Institute at the University of Western Australia, a visual shark deterrent (SAMS). 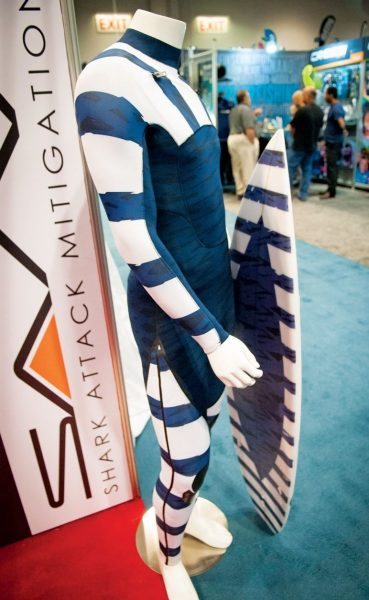 Their new patented technology was based on scientific study and experimentation and has come up with specific designs of patterns that can be applied to paddle craft, surfboards, wetsuits, apparel and equipment. These patterns are designed to confuse sharks. They do so by playing on what sharks have been determined to be able to see and not see at certain depths, distances and light conditions. These patterns have been developed into two types. The first is designed to hide or distort their image for the wearer within the water column. This pattern is intended for divers or those who frequent the water below the surface. The pattern uses coloration that appears disruptive and cryptic to sharks, causing confusion in these very wary creatures. The colors are varied within the pattern and are effective at all depths in which a diver might operate. The second pattern is designed to make the wearer, paddle craft or surfboard look totally unlike anything that sharks prey on and can even make the preys target appear “as an unpalatable or dangerous food option.” Licensing of these patterns is available and can be found on a range of products. sharkmitigation.com 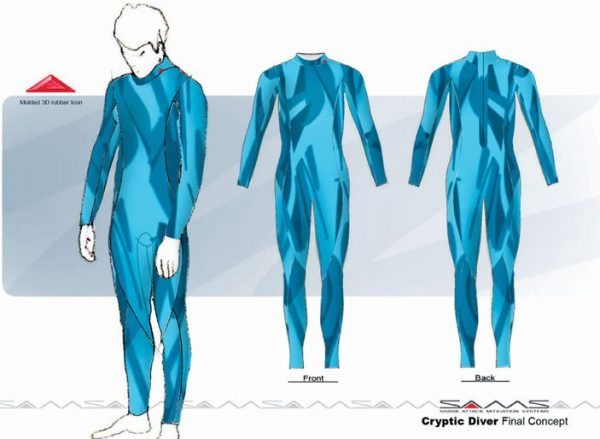 Glenn Hayeshttp://www.HayesStudios.com
Glenn Hayes is a writer and photographer based out of west central Florida and has marine industry background spanning almost a quarter century. He can be reached through his web site www.HayesStudios.
RELATED ARTICLES
Anegada, British Virgin Islands