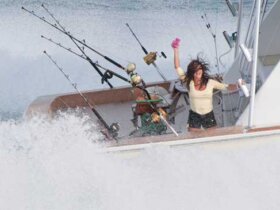 All At Sea’s Sports Fishing Guide May to October 2012

“The first two day days were good and we finished the second day in the lead with five releases,” recaps Wave Paver’s Davis. “Then, we had a bad day the third day. Didn’t catch a thing. We headed out on the lay day to fish and found a place on the (North) Drop that was productive for us. We headed back there today and it all came together for us.”

Eight boats were tied for first place with five blue marlin releases apiece going into today’s last day of tournament fishing. Jichi, a 68-foot Paul Mann homeported in Florida and helmed by Capt. Gene Lenow, jumped into the lead early by being the first boat to release six blue marlin with an early morning catch.

“Jichi got the jump on us and we knew we needed to get going,” tells Wave Paver’s Davis. “It was around 9:30 to 10 a.m. that I released a blue that bit on the pitch, and then another 10 to 20 minutes later. That put us back in the lead with seven releases. There’s a bunch of really good boats fishing there so we knew that anything could still happen.”

Wave Paver’s Davis released his third blue marlin of the day mid-afternoon, followed by a fourth released 15 minutes before lines out.

“We knew we had it after that fourth fish today,” Davis says. “We have a great team of guys, have fished together a long time and have a lot of fun together.

This is the first time Davis and his Wave Paver team have fished in the ABMT.

“It’s always been a dream of mine to fish this tournament,” Davis tells.

“This is our first season fishing in the Virgin Islands,” says Casca Dura’s Abud. “We fished the July Open and liked it so much we decided to stay and fish this tournament too.”

Abud adds, “We’ve fished off Anegada the other three days. Today, mid-morning, we decided to pull in the lines and head to the North Drop. That’s when we caught and released our two blue marlin.”