If You Want To Fly – There’s A New Hydrofoiler 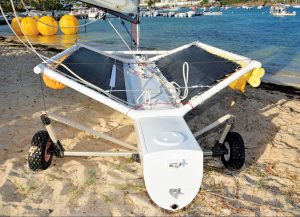 It’s the need for speed combined with the danger of living on the edge that is making hydrofoilers – sailboats with wing-like foils mounted under the hull – so popular in yacht design. The America’s Cup will be contended again on foiling catamarans and now this year the Extreme Sailing Series has announced it will use foiling GC32 cats. These trends prompted avid Caribbean sailor Tom Kozyn to build a moth-inspired monohull hydrofoiler right in his backyard in St. Thomas, U.S. Virgin Islands. Kozyn’s success may lead to a new Caribbean class.

“I knew I had to get one of these machines after reading articles online and after Rolex Yachtsman of the Year, Bora Gulari, won the Moth Worlds in 2013 on a foiler,” he says.

Kozyn, a carpenter and homebuilder by trade with a degree in mathematics from the University of Michigan, started the build last October. He and Tim Peck, a fellow St. Thomian and fiberglass guru, worked almost daily on the boat until its launch date on March 18th.

“Boat did not come with plans. I made one drawing in the beginning, then just notes. All design was done on the fly. I had a bucket full of parts from the late Bill Troutman and 95 percent of the hardware installed is spare parts. Each day presented problems. It amazed me how solutions offered themselves and how everything worked itself out,” he explains.

Kozyn built the foiler using a fiberglass Prindle 19 hull, which he shortened to 10-feet and then added a modified bow. Wing struts are fashioned out of carbon fiber windsurfing masts and the mast itself is from a used windsurfer. The sail is from Kozyn’s old Snipe, the carbon fiber boom is homemade, the flotation bags are from an Optimist dinghy, and the trampolines were made by Quantum Sails in Rochester, NY. The centerboard and rudder and their respective carbon fiber T-foils were all laid up by hand.

More specifically, the 14.5-foot foiler has an 11-foot waterline, 66-inch beam and 48-inch draft. Currently the mainsail is 85-square-feet. The Mylar and Kevlar rigging is light yet strong and the rudder is wormscrew drive for fine tuning.

“On the first launch we found out the boat was too buoyant, so we added weight,” Kozyn says.

To Kozyn’s knowledge, there are no other foiling boats like his in the Caribbean.

“It’s not for sale at this time,” says Kozyn. “We will however take deposits for boats to be delivered this time next year for the Caribbean spring regatta season. We don’t have a price worked out yet, but new Moths run $23,000 without sails. I’d love to get at least five orders and build up a one-design class.”