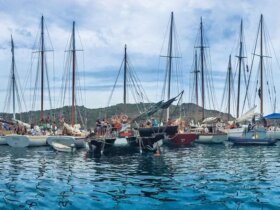 “A beautiful venue–the town of East Lyme let them use McCook Point and Hole-In-The-Wall Beach to accommodate the 336 boats in the championship fleet.  The winds were shifty, so they only got in six races over the three day event, and got their one discard.