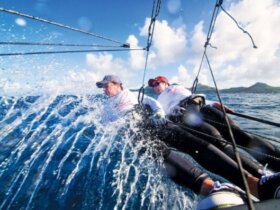 They set out to do it, and they did! Owner Liza Baldwin and skipper Randy West set sail in the 2006 edition of the Newport-Bermuda race on an untried boat that had recently been commissioned for racing. Their goal was to win their class, and that is exactly what they did: the 65’ wooden sloop, Van Ki Pass, took top honors in Class 12 of the Gibbs Hill Lighthouse Division in the 100 th anniversary edition of this classic race.

Completed in 1992 by marine builder Vic Carpenter, Van Ki Pass was put into storage in Newport in 1999, when Carpenter became ill. His intention was to sell the boat, but nothing happened until Baldwin came along and found the boat of her dreams. A Newport native, she was the only Newport owner in the race this year. “The whole town was routing for us,” says West. “They could look up the standings on the Internet and see exactly where we were.”

With the boat outfitted with the latest electronics, computers, and radar, West found he could also check the Internet and see his position vis-à-vis the competition. “It was great to be able to tell the crew we were in the lead.” Actually the fastest boat in the Class, in real time, was Belle Menthe, but with handicaps and corrected times based on various ratings, Van Ki Pass, won by seven hours after over four days of sailing.

“There were very light winds, and no big waves,” says West, who sailed with a crew of 13, six from Saint Barth and seven from Newport, including Baldwin. “With winds of just 1.8 knots to 16 knots, we were moving very slowly. I thought, man we’re dying out here, but so was everybody else. We’re the fastest of the slow-going boats.” Van Ki Pass was racing against some pretty fancy professional racing boats, and West was surprised that a heavier wooden boat could move so well.

Baldwin is new to racing but has taken to it like a natural. Following the Newport-Bermuda race, Van Ki Pass was invited to take part as the smallest entry in the Newport Bucket (whose sister race takes place in Saint Barth in early April) and the New York Yacht Club Cruise. By October, Baldwin, West, and Van Ki Pass will be back in Saint Barth, its new home for the winter season.