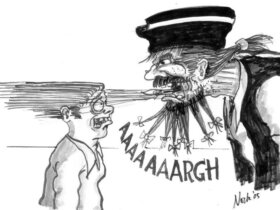 Sailing with Charlie: Terminology and the Neophyte

“Good Morning. The Start Committee welcomes all sailors taking part in the Angostura Tobago Sail Week. The time is now 10: 30. There will be a time check in approximately 15 minutes…”

The calm, collected and very clear (some crews have also called it very sexy) voice of Paulene Leighton comes over the VHF radio and sailors on the boats buzzing up and down in pre-start frenzy, know that ALL is WELL. With Trinidad and Tobago Sailing Association’s competent female committee boat crew “at the helm,” competitors are in excellent hands.

Core members of this team have been doing race committee work for over 17 years. It all started “way back when” with a group of friends led by Zarna Rostant. Their partners were out on the water racing, so they decided to get involved by helping to start and finish races. Initially working from shore, they later went out on the water in a rickety start boat, which was upgraded to a more comfortable catamaran, “The Mermaid”.

Zarna set the standards with scrupulous fairness, a gracious but firm way of handling people and careful attention to the racing rules. Spending 22 days or more every racing season out in all conditions, from blazing sun, breathless calm and drenching squalls in the Gulf, to big seas, strong current and storm winds in Tobago, drew the women together. Waiting long hours for that last slow boat to cross the finish line, they shared their experiences and thoughts on living, on relationships, on child rearing, often bringing their young children with them on the committee boat. They soon developed into a strong support group, so that whatever their personal problems and pressures, they looked forward to the fun and laughter and sharing on the committee boat each weekend.

As the standard of sailing at TTSA improved, so did their efficiency and sense of identity, expressed in the glamorous matching bikinis, bathing suits, wraps and hats they traditionally wear during the Angostura Tobago Sail Week.

In 2004, Zarna handed over the lead to Paulene, who brought to the mix her strong people skills, considerable race procedure knowledge and the ability to multitask with amazing cool. She can respond to a skipper’s question while signaling to the mark laying boat where to set the pin mark, or make sure a rookie committee crew member doesn’t get her signals crossed while counting down the start sequence. And as with all the committee girls, she can keep the amusing repartee going which makes the task at hand less onerous.

With support from the equally experienced Susan Reece, Karen Jackson, Erica See Tai and Gillian Fojo, she draws the best from her volunteer group that has won high praise from international judges at the North American Optimist Championships and other major regattas for their precision and calm under pressure. As President of TTSA Jerome McQuilkin said at a recent prize giving, “They are our Committee Girls: we love them, we are immensely proud of them and we deeply appreciate their commitment and contribution.” A fitting tribute to Trinidad’s fun-loving, but very serious about “getting it right”, Race Committee Crew.

Ruth Lund hails from Cape Town, where she grew to love racing and cruising, and lives aboard S/V Baraka, currently based in Trinidad.