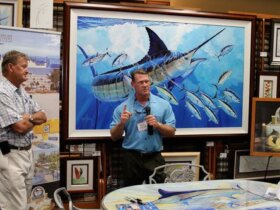 Greta the Great White Shark was one of the most engaging exhibits visitors saw when touring the Sarasota, Florida-based Mote Marine Laboratory & Aquarium this past winter and spring. The 14-foot long, 8-foot tall sculpture made entirely of plastic trash fished from the ocean featured lips crafted from buoys, a red tongue fashioned from cigarette lighters and most realistically a set of teeth cut from PVC pipe. Greta wasn’t alone in the exhibit. There was similarly made and equally impressive Natasha the Turtle and other larger-than-life, marine-figurines on display as part of a traveling exhibit by the Washed Ashore Project. 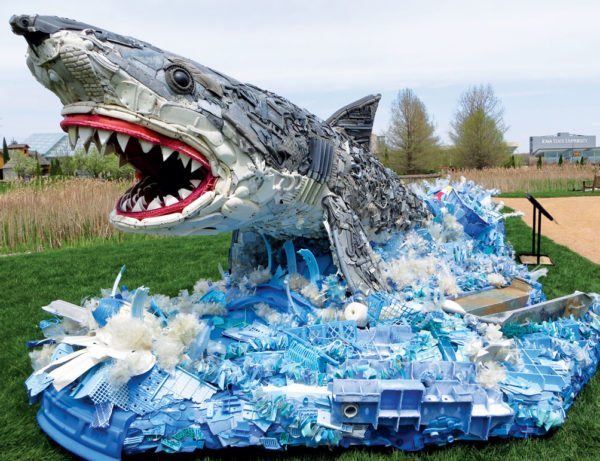 “Our goal is to reach the largest and most diverse audience possible in order to educate people about the plight of plastic pollution in our oceans,” says Angela Haseltine Pozzi, founder and artistic director of Washed Ashore, a non-profit based in Bandon, Oregon, which takes plastic and other trash cleaned up from the nearby coastline and transforms it into teachable art. “Scientists have the numbers and the hard science about the devastating effects of plastics in our seas. Yet, the arts have the power to reach across language and socioeconomic barriers and reach the heart, so the public can see it, get it and make changes in their own behaviors in terms of their use of plastics. After all, approximately 80 percent of marine debris comes from land-based sources.” 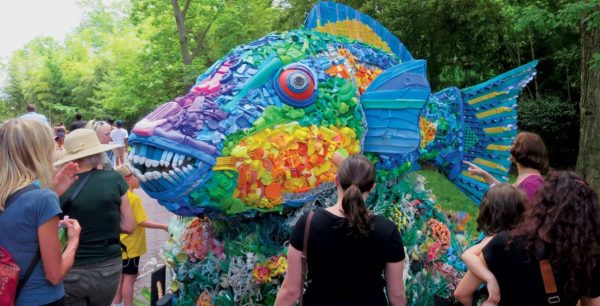 Pozzi, who is an Oregon native and artist by profession, has always loved the ocean.

In fact, she turned to this beautiful body of water and its timeless solace for healing when her husband suddenly passed away in 2002. What Pozzi found instead was that it was the ocean itself that needed healing. Hence, she launched Washed Ashore in 2010 to create dynamic works of art to graphically illustrate the tragedy of plastic pollution in the world’s oceans and to encourage conservation. Over the past 8 years, the organization has collected 21 tons of marine debris from a 100-mile l9ength of Oregon beachfront and turned into 70 works of art. Corporations and individual citizens have commissioned these works. For example, Washed Ashore created Flash the Marlin on request of the Costa Sunglass company for a conference at the International Game Fishing Association headquarters in Dania Beach, Florida, a few years back. Sea creatures like fish and turtles, as well as habitats like replicas of bleached coral reefs are the subject of the organization’s art.

“The biggest creative challenge is that we use 95 percent of the debris that comes in, throwing away only what is toxic. This includes plastic toys, toilet seats, shoes and more. What is very disheartening is to constantly see bite marks in the plastic bleach bottles. Fish and other marine creatures that think this is food. It’s certainly a reality check. But if you think about it, we love plastic. Plastic is a big part of everywhere in our homes and our lives,” Pozzi says. 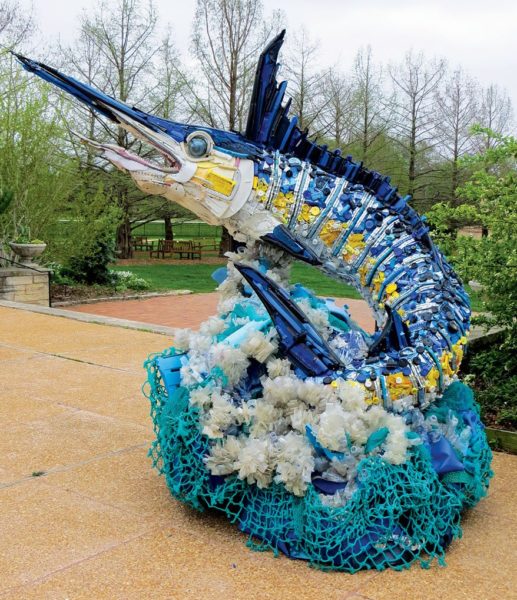 Today, Washed Ashore fulfills its wide-reaching educational goal and earns funds to continue its work via exhibiting its art pieces.

The idea started in 2014 when Sea World commissioned 12 pieces total for its three water parks. Pozzi says this caused the small organization to step up to the plate in a much bigger way and to do so quickly. When the exhibit concluded, Sea World donated the art pieces back to Washed Ashore to start a traveling exhibit. These exhibits showcase 10 to 12 pieces at a time, and are hosted at places such as museums, aquariums and botanical gardens. More specifically, the exhibits have been everywhere from the Smithsonian Institute in Washington, D.C., and the United Nations Plaza in New York City to Florida venues such as Mote in Sarasota, Mounts Botanical Garden in West Palm Beach and upcoming the Naples Zoo, in Naples, Florida, on November 17 to April 21, 2019.

These litter critters themselves are what is so captivating, both for their size and construction.

For example, there’s the 10-foot tall sea anemone made of recovered Styrofoam, a 16-foot long puffer fish designed with multi-colored plastics and 10-foot tall polar bear sitting on a 12- by 12-foot wide replica of an iceberg. Washed Ashore works with the organization hosting the exhibit to curate the educational theme. Then, educational signage is placed throughout the display to convey facts and ways to prevent ocean plastic pollution. 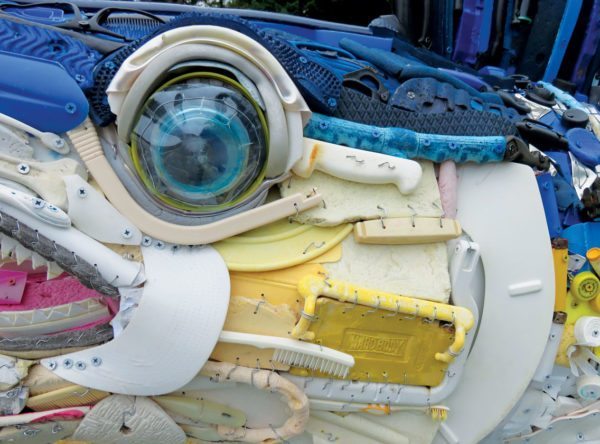 “We do a lot of free field trips for school children to our facility in Bandon. After one trip, I remember an 8-year-old student tugged on her parent’s and grandparent’s arms to come see some the art. She told them how important it was to keep plastic out of the ocean and that they needed to change what they did at home. She was very serious. To me, that’s what it’s all about. Providing education to the next generation and understanding the role we all play in the plight of plastics in our oceans. After all, the oceans are not the endless bounty we once believed.” washedashore.org