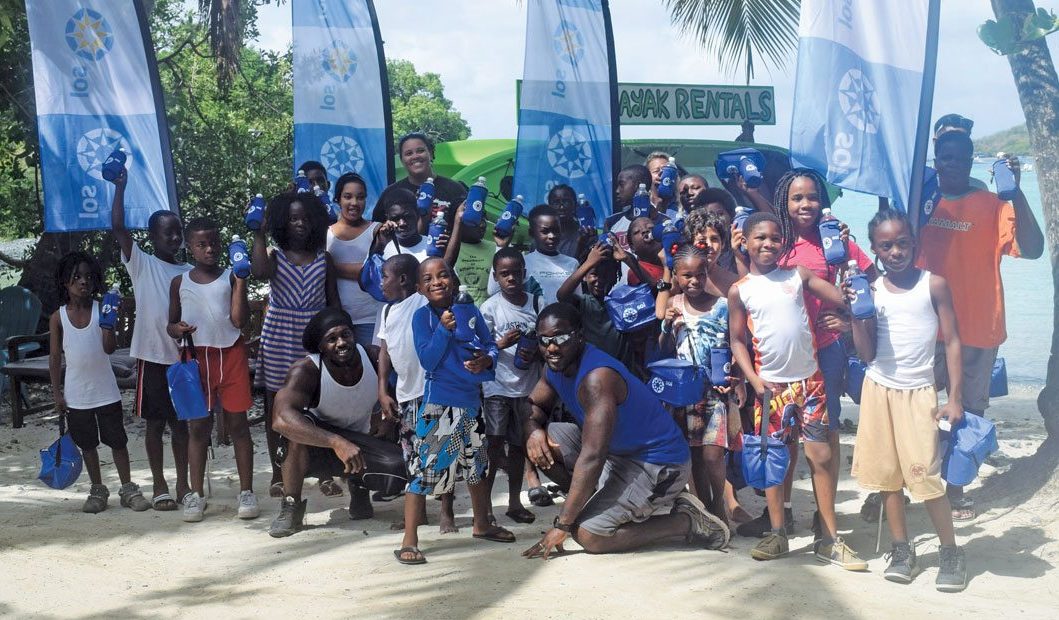 “We’re different than other regattas where sailing is far offshore,” says Byron Tromp, General Coordinator of the Bonaire International Sailing Regatta & Festival, and Secretary of the Bonaire Sailing Foundation (BSaF.)  “This is one of the few where island people are part of it.”

And from the crowds of participants and race watchers lining the waterfront promenade all week in front of the Kas di Regatta, almost every one of Bonaire’s 14,500 islanders played a role in celebrating the 40th birthday milestone October 7 to 14.  Schools on Bonaire, Aruba, and Curacao were closed all week and even the government shut down for an afternoon so everyone could attend festival events.

Race Director and Chairman of the BSaF Elvis Martinus welcomed crowds at the Sunday night Skippers Meeting with 40th birthday cake and an invitation to the grand opening All Nations Parade through the streets of Kralendijk.  This year’s regatta was dedicated to the Bonaire Lion’s Club, whose members helped launch it in early days.

The regatta started in 1968 with just two fishing sailboats, Sislin and Velia when regulars at a waterfront resort bar (today the Divi Flamingo Beach Hotel) began betting cases of beer on whether resort manager “Captain Don” Stewart or bartender Hubert “Ebo” Domacasse could win a race clockwise around Klein Bonaire.  On September 8, Ebo won 27 cases of Amstel by finishing three minutes ahead of Stewart—and the regatta became an annual tradition.

Layer upon layer of competitions have been added and dozens of boats compete, large and small—this year, a record 107 wind-powered microboats took part.  Reflecting Bonaire’s excellence in producing windsurfing athletes, 35 young people took boards to their own course between shore and Klein Bonaire.  All together, there were 215 registrants this year, not counting crew—no wonder prize presentation took 2 and &frac12; hours!

Optimist sailors sported brand new blue and yellow sails—donated by Caribbean Homes, made in Holland for the event, and transported to Bonaire just in time courtesy of KLM pilots and flight attendants.

“Kids like speed,” says Tromp of the younger entrants.  “They start out and, when they gain control of those boats, they can advance.”

Traditional fishing boat races are perennial crowd-pleasers and the five competitors this year included three Soliano brothers whose father Ismael sailed in the first regatta: Jopie, Karel “Papichi” and Giovanie. (Youngest brother Giovanie now lives in Oklahoma, USA, but returns each year to sail.  Ismael had to sit this year’s race out due to a broken thumb, but his tiny grandson A.J. took home a trophy for second in Microboats C.  Ebo’s son Andy Domacasse competed in the fishing boat Papagayo.

Many of the 31 big yachts journeyed east from Curacao to compete, and the pre-regatta Budget Marine Aanbreng Race trophy was presented by Budget’s Peter Werdath to Curacao Marine 1010 in the Racing Class and to Venus Callipyge in the Cruising Class.  The two beat out the other ten boats making the 43 mile crossing early Saturday morning through a heavy squall with lightning and high winds.

“When we started, there were no local participants other than fishermen,” says Tromp.  “Now, in the years since, almost all classes have locals.  We can always have a regatta even if no one comes from off island.”

October’s gusty downpours came and went but dampened no one’s spirits.  “This is good—it’s a test of your abilities,” Tromp pointed out.  A pod of dolphins saluted the committee boat at Thursday’s sunny start.  The week flowed on, crammed with swimming and bike races, walks, runs, softball and volleyball tournaments, a power boat parade, a George McCrae concert, and other nightly festival events, ending with celebratory fireworks Sunday night.

Captain Sergey Boer and his Curacao Marine 1010 crew kept their strong start and went on to win the Overall Racing Niki Tromp Trophy, named for Tromp’s father, a longtime Bonaire Regatta organizer who died in 1992.  Byron Tromp and his family took the stage to present the winners with a huge trophy—and, of course, a traditional case of beer.

Chris Goodier is a St. Croix-based writer and the editorial director of All at Sea.  Her articles and photographs have appeared in numerous publications including Caribbean Travel & Life, Discover St. Thomas/St. John/St. Croix, and Caribbean Meetings & Events.